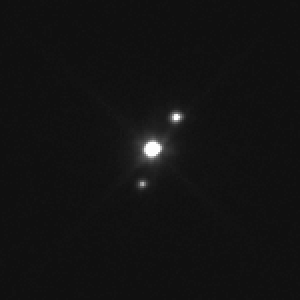 Haumea is a dwarf planet.

Haumea is one of five planets recognized as a dwarf planet. The other four are Ceres, Pluto, Makemake and Eris.

The International Astronomical Union (IAU) decided the rules to what makes a planet in 2006. If they do not meet the three criteria the IAU uses to define a full sized planet, they were giving the name of a dwarf planet.

The three criteria the IAU issued to be recognized as a planet are, firstly, it has to orbit the Sun, secondly, its shape should resemble a ball like figure, and lastly, it must be able to clear the area around its orbit, by pushing other objects out of its way with its impressive size and gravity.

Haumea is the third closest dwarf planet to the Sun.

Haumea lives in the Kuiper Belt.

In 2017, scientists announced that Haumea is the first known Kuiper Belt object to have a ring system.

Haumea’s ring system is thought to be composed mostly of rock, with a thin layer of surface ice.

Haumea’s shape has being described as oval-shaped, egg-shaped or the shape of a flattened football, spinning end over end.

The largest dwarf planets in the solar system are Pluto, followed by Eris, Makemake, Haumea, with the smallest being Ceres.

The order of the dwarf planets closest to the Sun outwards is Ceres, Pluto, Haumea, Makemake and then Eris being the furthest from the Sun.

The orbit period for Haumea on its travels around the Sun is 283.3 Earth years.

One day on Haumea only lasts 3.9 Earth hours, due to the fact it is one of the fastest rotating objects in our solar system.

Haumea is located beyond Neptune’s orbit.

Haumea has two moons called “Hi’iaka and Namaka”, which were discovered in 2005, in the W.M.Keck Observatory in Hawaii.

Haumea’s moons names derives from the daughters of the Hawaiian goddess of childbirth and fertility, Haumea.

Haumea’s moons are though to be the result of a collision from a large object with the the dwarf planet billions of years ago.

Two teams of scientists claim the discovery of Haumea. Mike Brown and his team discovered Haumea on image’s they had taken in 2004, and around the same time, Jose Luis Ortiz Moreno and his team claimed to have found images of Haumea also.

The International Astronomical Union decided to give credit for the discovery to Jose Luis Ortiz Morena and his team, but the name was giving to Mike Brown and his team.

The temperature on Haumea’s chilly surface is -241° Celsius.

Haumea’s surface is reckoned to me made up of rock, with a very thick coating of ice.

Haumea is the third brightest object in the Kuiper Belt. On a clear night with a good quality telescope, it is possible to see Haumea in the night sky.