The word astronaut is Greek for “Star Sailor.”

An astronaut is man/women who is specially trained to travel into outer space.

They are very dedicated and highly intelligent and would have done exceptionally well in school and college.

Astronauts have to undergo extensive training and testing before they can put a foot into a spacecraft.

Training involves a lot of simulations where you work through experiences of space, such as lack of gravity and weightlessness.

Astronauts wear a spacesuit when they leave the spacecraft. It provides them with air, and protects them from extreme temperatures and radiation from the sun.

Out of the 500 or so astronauts who have traveled to space, only 25 or so have orbited the moon, of which, only half have actually touched down on its surface.

Up till today, there has been nineteen astronaut and cosmonaut fatalities during spaceflight.

Neil Armstrong was the first human to walk on the moon in July 1969, aboard the Apollo 11. He is well known for the famous statement “That’s one small step for man, one giant leap for mankind.”

Buzz Aldrin was the second person to walk on the moon in 1969, just after Neil Armstrong. He was the pilot on the Apollo 11. 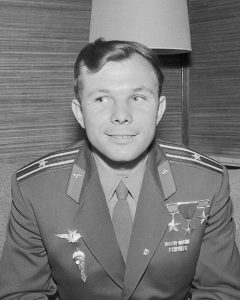 Yuri Gagarin was a Russian cosmonaut. In 1961, aboard the Vostok spacecraft, he became the first human to successfully travel into outer space and orbit the earth.

Guion Bluford was the first African American in space. He flew on four different space shuttle missions between 1983-1992, starting as a mission specialist on the Challenger in 1983. He also flew 144 missions during the Vietnam War as a pilot in the U.S Air Force. 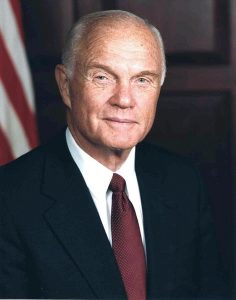 John Glenn became the first American astronaut to orbit the earth, circling it three times in 1962, aboard Friendship 7. He also became the oldest man to fly into space, when at the age of 77, he once again traveled to space aboard the Space Shuttle Discovery in 1988.

Gus Grissom was the second American to travel to space in July 1961, as pilot aboard the Liberty Bell 7. He was also commander of the Gemini 3 spacecraft in March 1965, which successfully completed 3-low earth orbits in just under 5 hours.

Unfortunately, Gus Grissom died along with his fellow astronauts Ed White and Roger Chaffee on January 27, 1967, in a fire during a pre-flight test for the Apollo 1 mission at Cape Kennedy, Florida.

Valentina Tereshkova became the first women to fly to space in June of 1963, when she launched on the Vostok 6 mission. The Russian cosmonaut spent three days in space, and orbited earth 48 times in her space capsule.

Sally Ride became the first American women in space in 1983, as a crew member on the Space Shuttle Challenger.

Alan Shepard became the second person and first American to travel to outer space in 1961, aboard the Freedom 7. Years later, he became the fifth person to walk on the moon when he was the commander of the Apollo 14. He was famous for hitting a golf ball while on the moon.

Mae Jemison became the first black women astronaut to travel to space in 1992, aboard the Space Shuttle Endeavour.

Vladimir Komarov, has the unlucky title as the first human to be killed in spaceflight. In 1967, after a day in space as he descended back to earth, the lines of his Soyuz 1 parachute became tangled. The parachute deflated and the craft plunged to the ground, bursting into flames.

On Monday July 20th, 2020, SpaceX’s Falcon 9 launched from Cape Canaveral Air Force Station in Florida, with NASA astronauts Bob Behnken and Doug Hurley on board. Their missions included delivery to the International Space Station and to launch communication and Earth observation satellites. It was Americas first launch from their country since 2011.