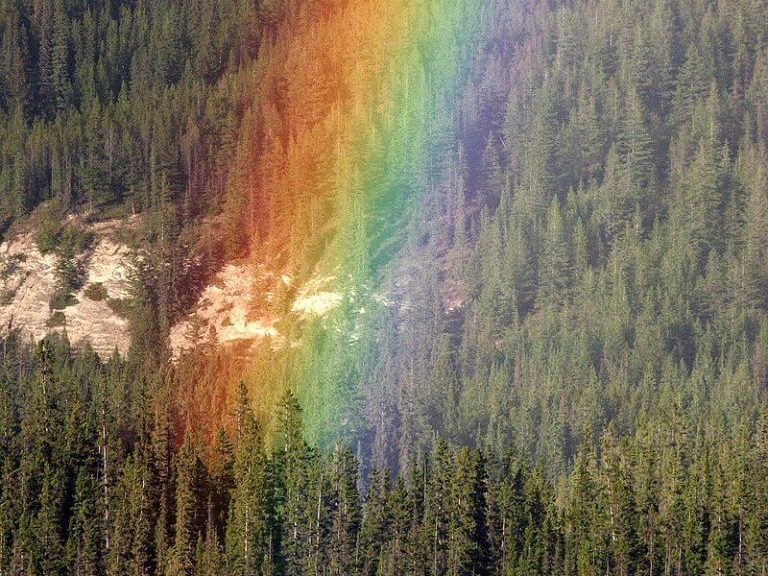 WHAT IS A RAINBOW ?

Rainbows are made up from seven different colors that comes from white sunlight passing through rain drops. The colors that form a rainbow are red, orange, yellow, green, blue, indigo and violet. You don’t only see rainbows in rain. Sometimes you can see them in fog, misty clouds or on the spray from a waterfall.

There are few nicer visions than a brilliant rainbow arching across the sky.

HOW ARE RAINBOWS FORMED ? For a rainbow to form, you need two ingredients, sunlight and raindrops.

Sunlight is white light, which is made up of many colors, and when the sunlight enters through a raindrop, the rays of sunlight bends and reflects off the back of the raindrop, causing the colors to separate and spread out to form a rainbow.

Although a rainbow looks like an arch to us, it’s actually a full circle. The reason we only see some of the circle is because we normally see the rainbow from the ground.

MAKE YOUR OWN RAINBOW !!!

A rainbow is a multi-colored arc that forms in the sky.

A rainbow occurs when it is raining in one part of the sky and sunny in another.

Each raindrop makes it’s own rainbow, but it would take millions of raindrops for us to see a rainbow.

To see a rainbow, you must have the sun behind you and raindrops in front of you.

Sunlight is made up of all the colors of a rainbow. When they are all mixed together, it’s called white light. White light is the light we see all the time.

No two people can see the same rainbow, because if someone is standing next to you, they are standing in a different spot, which means they see the rainbow in a slightly different place, plus, they are also looking at different raindrops.

Even your own left eye sees a rainbow differently from your right eye.

You cannot touch a rainbow.

Sir Isaac Newton identified the seven colors of the visible spectrum that together make up white light.

The colors of the rainbow are red, orange, yellow, green, blue, indigo and violet.

A good way to remember the colors of the rainbow is if you think of the acronym, ROY G BIV.  You could think of it as a mans name.

Earth is the only planet in the Solar System where rainbows can form.

In ancient times, different people had different beliefs about rainbows. In Ireland, it’s an old saying, that there is a pot of gold at the end of a rainbow. I wish.

There is no end to a rainbow, because it’s a full circle. We only see some of the circle, because we view the rainbow from the ground.

Full circular rainbows can only be seen if you are in the air. For example, you can see all of a rainbow from an airplane, since there are enough raindrops between you and the ground to make it visible.

You cannot fly over a rainbow as they move with you.

A moonbow is a rare rainbow that appears at night. It’s created by light from the moon.