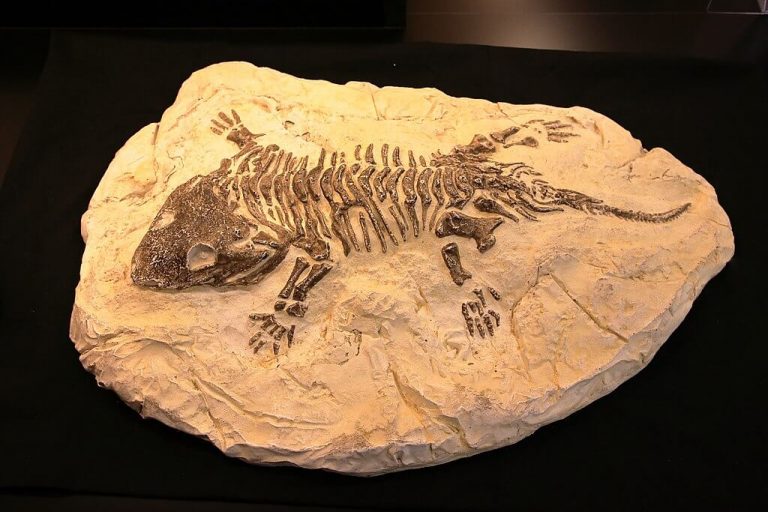 WHAT IS A FOSSIL ?

Fossils come in all sizes. The largest are dinosaur bones, where one bone could be ten or more feet in length, and the smallest are plant spores, which could measure only a few hundredths of an inch across.

Any trace of prehistoric remains of a plant or animal is known as a fossil.

There are two main types of fossils, body fossils and trace fossils (see below), and a majority of these are formed by a process called mold and cast.

WHAT IS MOLD AND CAST ?

This process involves any dead creatures (or plants) that died millions of years ago, and may be buried in sand or mud on the sea-bed.

Over the years the soft part of the animal rots away, while the hard parts such as its shell or bones are left behind, and in time, the mold left behind becomes solid rock, due to the pressure of mud and sand building up on the skeleton.

This rock will eventually rise back to the Earth’s surface during earthquakes or by the natural rising of the worlds mountains, leading to the find of these fossils from millions of years ago.

WHAT ARE BODY FOSSILS ?

Body fossils are the most common type of fossil found across our planet.

Most body fossils are of hard parts, such as bones, teeth, claws, shells, branches and woody trunks. They can range in size from huge dinosaurs, to tiny living objects that has to be viewed through a microscope.

It is widely accepted that the best preserved body fossils are from the hardest part of the body. They can tell us something about the appearance of ancient life forms.

Dinosaurs eggs is another type of body fossil. In these eggs, you can find fossils of baby dinosaurs.

WHAT ARE TRACE FOSSILS ? 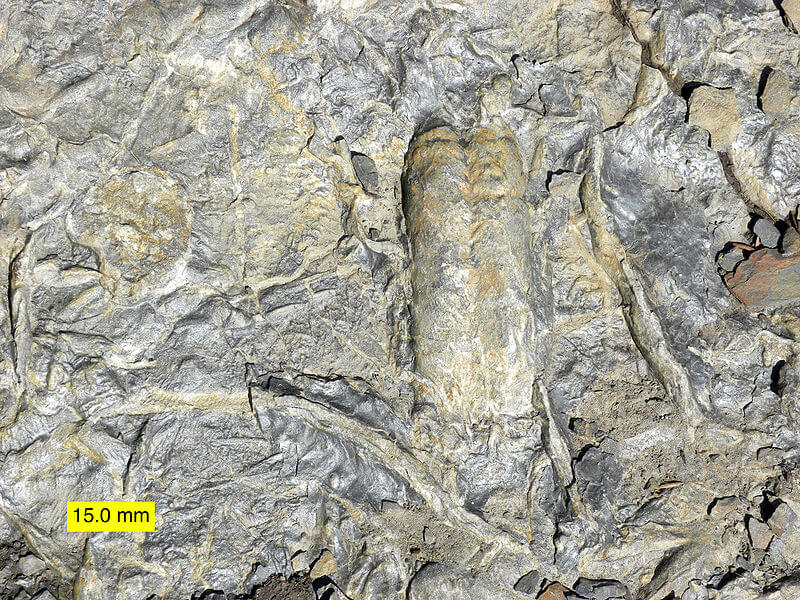 Trace fossils are physical evidence of the activity of animals and plants from millions of years ago.

Trace fossils gives us information about the organism that is not revealed by body fossils. For example, trace fossils were most often created in soft sediments, such as footprints and are usually preserved if the sediment remained undisturbed until it has become rock.

Trace fossils can also tell us how the animals behaved, what their activities were like, and what they ate. A trace fossil, such as a footprint, is a curious reminder of creatures long gone.

The study of fossils is called paleontology.

The study of fossil plants is paleobotany.

An area where skeletal remains are found is called a “bone bed.”

Fossils tell us about life millions of years ago.

The parts of an animal most likely to fossilize are the hard bits, like the bones, teeth and shell.

Teeth are the most commonly found fossils. They last well because they are so hard.

Nobody has ever seen a dinosaur as they became extinct millions of years ago. We only know about dinosaurs from finding fossils of their bones, footprints and eggs.

The first dinosaur bone was discovered in 1818, however in 1858, an American fossil hobbyist called William Parker Foulke, discovered the first nearly complete skeleton of a dinosaur in Haddonfield, New Jersey. The finding of this skeleton, a “Hadrosauras Foulkii,” rocked the scientific word and changed our view of natural history.

The first known evidence that dinosaur skin was similar to that of today’s reptiles, came from a mummified “Edmontosaurus” carcass, which was found in Wyoming, USA, in 1908, by Charles Hazelius Sternberg and his three sons.

Some fossils look the same as animals that are alive today, such as a Nautilus shell, that resembles ancient Ammonites.

Fossils of tree trunks and stems are common, especially in rocks that contains seams of coal. Among the layers of coal, you might also find fossils of delicate fern leaves.

Experts believe that modern birds are descended from dinosaurs, because scientists have found fossils of dinosaurs with feathers.

Fly’s and ants often get caught up in sticky resin that oozes from trees, where they will die, and may become a fossil.

Fossils of dead sea creatures lie buried under the constant build up of muddy and sandy layers on the world’s sea-beds.

Fossils are found in sedimentary rock, such as limestone.

Fossilized burrows can give paleontologists information about where animals lived.

Fossilized feces can give paleontologists information about what animals ate.

Fossils have been found on every continent of Earth.

In October 2020, one of the most complete specimens of a T-Rex fossil in the world was sold for a record $31.8m by Christie’s in New York. The fossil was discovered in South Dakota, in 1987, by amateur paleontologist Stan Sacrison. Paleontologists spent more than 30,000 hours excavating and then assembling the 188 bones of the skeleton. Experts believe the exceptional specimen of the Tyrannosaur was around 20 years old when he died. The fossil, nicknamed Stan, stands 4m high and 13m long. His skeleton shows evidence of fights with fellow T-Rexes, some 67 million years ago.

The skeleton of a dinosaur-era reptile is being described by experts as “one of the greatest finds in British paleontological history.” Scientists estimate the fossil of the ichthyosaur – which are sometimes called sea dragons – is about 180 million years old. Measuring around 10m (33ft) in length and with a skull weighing approximately one ton, it is the largest and most complete fossil of its kind ever found in the UK. It was discovered by Joe Davis during a routine draining of a lagoon island at Rutland Waters in the Midlands of February 2021.

The fossil of a giant flying reptile, known as a pterosaur, that was discovered on Scotland’s Isle of Skye, has been confirmed as the largest ever found from the Jurassic period. The pterosaur had an estimated wing span of 2.5 meters and lived around 170 million years ago. The fossil was discovered during a field trip in 2017 by PhD student from the University of Edinburgh, Amelia Penny.