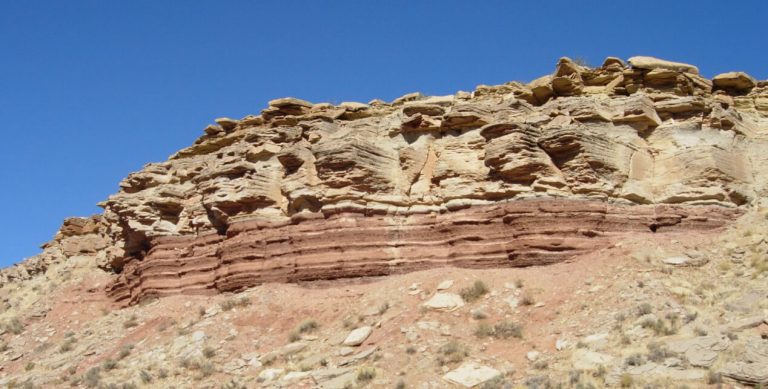 WHAT ARE SEDIMENTARY ROCKS ?

There are three different types of sedimentary rocks. They are all made up of minerals, sand, mud and even the remains of dead sea creatures. They can be formed in desserts, lakes, rivers and seas.

Firstly, you have Clastic sedimentary rocks, such as breccia, sandstone, shale and conglomerate. They are formed by the cementing together of grains of sand over thousands of years.

Secondly, you have Chemical sedimentary rocks, such as rock salt, gypsum, chert, flint, some dolomites and some limestones. They are formed by precipitation of minerals from water, due to chemical reactions. (Precipitation is when dissolved materials comes out of water)

Lastly, there is Organic sedimentary rocks, such as coal and some limestones. They are formed from the shells and skeletons of millions of microscopic sea creatures and the accumulation of plant debris.

Sedimentary rocks are formed by the accumulation of sediments.

The sediments that form sedimentary rocks comes from other rocks that has been weathered over the years by rain, wind and snow.

As mountains age and are worn away by erosion, all the broken bits end up in rivers and streams as they fall down the mountains. These little bits of rocks and sand are called the sediments, which over time as they sit at the bottom of the water will become cemented to each other and form into a sedimentary rock.

You can easily recognize a sedimentary rock because it compromises of layers.

Coal is sedimentary rock, that is formed from plants that died millions of years ago. When these plants died, they formed into coal by the pressure from the rocks on them over time.

When rocks are broken down where they stand, it is called weathering.

The oceans waves can hurl rocks and stones at cliffs, slowly breaking down the coastline.

Rocks are continuously being eroded over millions of years to produce sand.

Rocks are damaged by the weather. They shrink in the cold and expand when its hot.

Caves are formed when a solid area of rock is eating away from a constant flow of water over thousands of years.

Sedimentary rocks only form a small part of the Earth’s crust, while they are most common to the human eye on its surface.

Limestone forms the metamorphic rock marble when subjected to extreme heat and pressure over time. This process is called metamorphism.

Limestone is used a lot in the construction industry for building roads and in the making of cement.

Sandstone forms the metamorphic rock quartzite when subjected to extreme heat and pressure over time.

Sandstone is a common building and paving material, while it is used a lot in the construction of fountains and statues.

Some sandstones are resistant to weathering, making it a very important material.

Mudstone forms the metamorphic rock slate when subjected to extreme heat and pressure over time.

Mudstone can be used in paving stones, pottery and roof tiles.

The famous  White Cliffs of Dover in Kent, England, is made up of trillions of dead sea creatures that died over 60 million years ago.

The people who study rocks are called geologists.