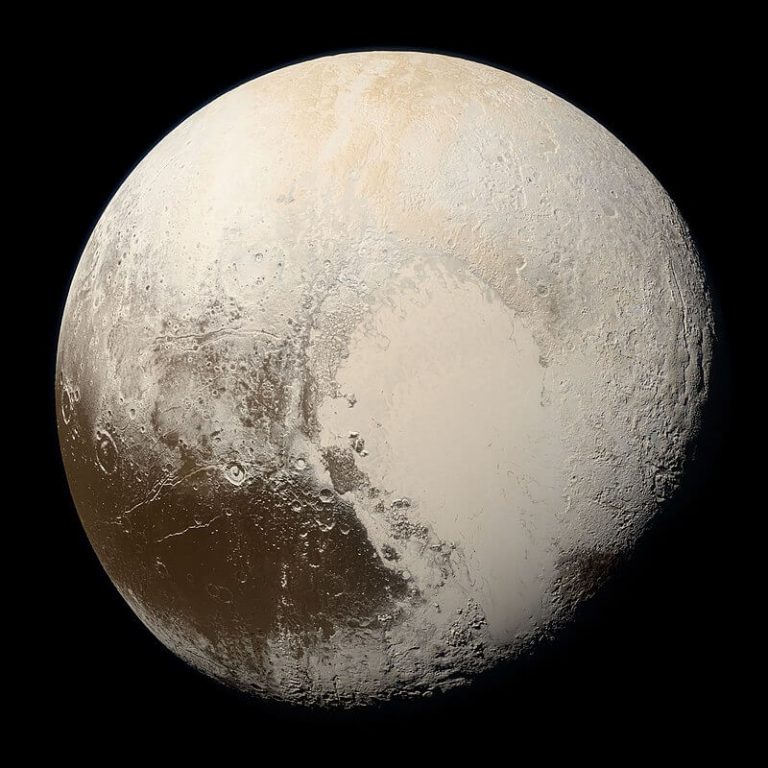 An orbit is a journey/path that an object takes in space. For example, stars, planets or moons.

Gravity is the pulling force that works in space.

The three factors that are required to be called a planet by the IAU are, firstly it has to orbit the Sun, secondly its shape should resemble a ball like figure, and lastly it has to clear the area around its orbit by pushing other objects out of its way with its impressive size and gravity.

The reason why Pluto was downgraded from a planet to a dwarf planet is because it could not clear the area around its orbit by pushing other objects out of its way with its size and gravity.

At one time, it was thought that Pluto could be a planet as huge as seven Earth’s. Now it is reckoned to be only 1/459 of Earth’s mass.

Pluto is smaller than the Earth’s moon.

Pluto isn’t the only dwarf planet out there – so far, four others have been discovered: Ceres, Haumea, Makemake and Eris.

As our most distant planet, Pluto remained the last greatest conquest. However, in 2001, a project called New Horizon started to send a probe to Pluto. In 2006, it was launched on it’s nine and a half year flight. Just six months later with New Horizons already past Mars, it was announced that Pluto wasn’t a planet after all.

A year on Pluto lasts for 248 Earth years.

Pluto has five known moons, the largest being Charon, which moves around Pluto every six days. The others are called Styx, Nix, Kerberos and Hydra.

Like planets, all dwarf planets travel on orbits that is shaped like a stretched circle. Because Pluto’s orbit is tilted and egg-shaped, it means that its distance from the Sun changes the most as it travels .

Pluto’s path takes it through the Kuiper Belt along with tens of thousands of frozen dwarf planets and asteroids. Pluto is one of the largest objects in the Kuiper Belt. The belt is so far away, little is known about this area of space.

The Kuiper Belt is a ring of icy bodies just outside of Neptune’s orbit. Scientists believe the Kuiper Belt, similar to the Asteroid Belt, is a region of leftovers from the Solar System’s early history.

Pluto was discovered in 1930, by Clyde Tombaugh at the Lowell Observatory in Arizona.

The name Pluto, was suggested by an 11 year old English schoolgirl, called Venetia Burney. It won over numerous other suggestions, because it was the name of the Roman god of the underworld.

Pluto is one third water.

Pluto lies 4.67 billion miles from Earth at its most distant . This is when the two bodies are on the opposite sides of the Sun from each other.

Pluto’s location was predicted by Percival Lowell in 1915.

The age of Pluto is approximately 4.46 to 4.6 billion years old.

Pluto is the largest dwarf planet.

Pluto’s gravity is super weak. If you weigh 70 pounds on Earth, you would only weigh 4 pounds on Pluto.

Pluto’s surface is covered with ice, and has several mountain ranges and a scattering of craters.

The atmosphere of Pluto consists of nitrogen with some carbon monoxide and methane.

Pluto has a diameter of around 1400 miles or about 2240 kilometers.

It takes Pluto 248 and a half years to complete its orbit round the Sun. The Earth takes 24 hours, one day.