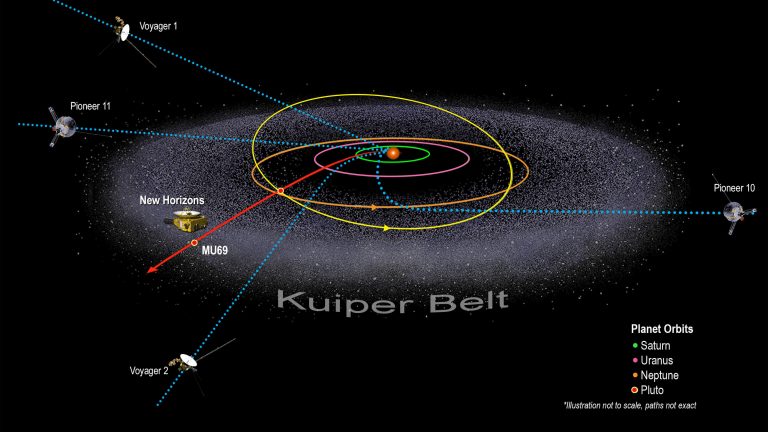 WHAT IS THE KUIPER BELT ?

The Kuiper Belt, a disc-shaped region, is one of the largest structures in our Solar System.

It is located on the outer areas of our Solar system. This enormous ring of icy bodies stretches from the orbit of Neptune to the Oort Cloud.

It consists of rocks, comets, dwarf planets and plenty of ice, all in a variety of different shapes, colors and sizes.

Astronomers believe there are thousands of objects measuring up to 100 km across in the Belt, plus trillions of smaller objects as well.

Both the Oort cloud and the Kuiper belt are thought to be the main sources of comets.

The Oort Cloud lies beyond the Kuiper Belt.

Due to the vast distance, all objects in the Belt takes hundreds of years to complete one orbit around the Sun.

Objects in the Kuiper Belt are ice cold. It would be very hard for anything to live there.

Neptune largely controls the structure of the Belt due to it’s gravitational field.

Scientist believe all the objects in the Belt were left-overs from the birth of the planets. They were forced out to this remote outer ring due to interactions with the giant planets.

There are four known giant planets in our Solar System: Jupiter, Saturn, Uranus and Neptune.

The Kuiper Belt is similar to the Asteroid Belt, although it’s much bigger and colder, as it’s much further from the Sun.

The Kuiper Belt is 20 times as wide, and up to 200 times bigger than the Asteroid Belt.

Astronomers believe that some of the moons of other planets originally came from the Kuiper Belt.

Pluto is the largest object in the Kuiper Belt.

There are three official known dwarf planets in the Kuiper Belt. They are Pluto, Haumea and Makemake.

The Kuiper belt is home to many things we cannot find inside of our Solar System. Floating ice, and most importantly the ancient rocks are what astronomers are trying to study, in order to better understand our Solar System. What they have learned is most objects are made up of ice and rock, and the interesting fact is the ice on them isn’t always made of water, but of frozen chemicals like methane and ammonia.

The Kuiper Belt was named after astronomer Gerard Kuiper. He figured out it existed in 1951, but was only proven in 1992 by astronomers, Jane Luu and David Jewitt.

The official name of the Kuiper Belt is the Kuiper-Edgeworth Belt, while others call it the Trans-Neptunian Region.

Most of what we know about the Kuiper Belt comes from the Hubble Space Telescope and ground-based telescopes, although NASA’s “New Horizon” flew past Pluto in July 2015, sending back the first ever close-up images of the dwarf planet, its moon’s, and other objects in the Belt.

The Kuiper Belt is still a very mystifying place, and we still have a lot to learn about it.

The Kuiper Belt is pronounced “Kypurr.”

It would take you 6,000 years to drive in an SUV to the Kuiper Belt, and if you were lucky enough to have a jet, it would only take 600 years.