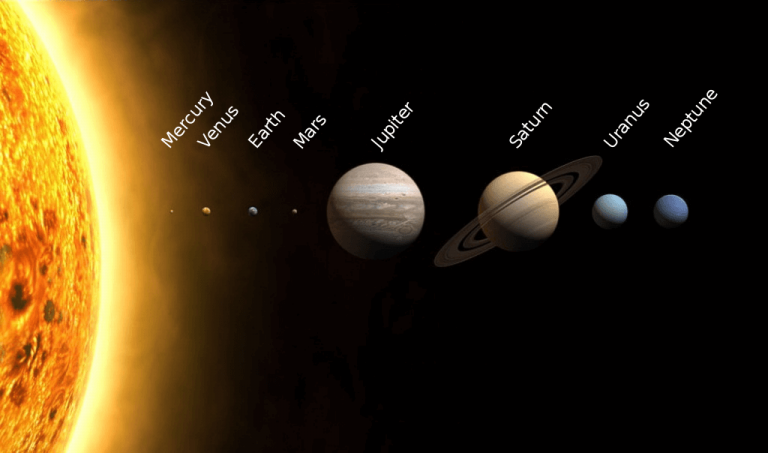 INTERESTING FACTS ABOUT THE SOLAR SYSTEM !!!

The Sun is at the center of a neighborhood of planets called the Solar System.

Everything in the Solar System revolves around the Sun.

Earth is in the middle of the Solar System. It’s the third of the eight planets that each makes a special journey around the Sun called an orbit.

All the planets travel in the same direction around the Sun but at different speeds. Every planet spins on a tilt, although some tilt more than others.

A planets year is how long it takes to orbit around the Sun. The further a planet is from the Sun, the longer it’s orbit will be. The planets with the longest orbits have the longest years.

A planets day is the amount of time it takes to complete one full spin on its axis.

The Solar System is made up of the Sun, the eight planets that orbit it, dwarf planets, dozens of moons and millions of asteroids, comets, and meteoroids, which are all racing at different speeds around the Sun.

A moon is a large rocky object in space that orbits a planet. Moons come in all different shapes and sizes and most look like small planets. All planets apart from Venus and Mercury have one or more moons. Earth has one moon, while it’s believed Jupiter has the most, with an astonishing 67 known moons.

Asteroids can be mostly found orbiting the Sun between Mars and Jupiter in an area known as the Asteroid belt.

The comets we see in the night sky originate in either the Kuiper belt or the Oort cloud.

All the planets in the Solar System are held in formation by gravity. The Sun has the strongest gravity of all so it forces the planets to keep their paths around it. It’s also gravity that keeps a moon in orbit around it’s planet.

Gravity is defined as the pulling force that works in space.

There are two names for the eight planets, the Inner Planets and the Outer Planets.

Earth, Venus, Mercury and Mars make up a group called the Inner Planets.

Jupiter, Saturn, Uranus and Neptune make up a group called the Outer Planets.

The planets nearest to the Sun travel a lot faster than those which are further away.

Even though Jupiter is the largest planet in the Solar System, it turns the fastest. It makes one full rotation of the Sun in less than 10 hours. Earth takes just under 24 hours (23 hours, 56 minutes and 4.0916 seconds).

The Solar System was formed around 4.6 billion years ago.

The 5 dwarf planets in the Solar System are called Pluto, Ceres, Haumea, Makemake and Eris.

Pluto, up until 2006, was the ninth planet in the Solar System, this is when it was demoted to a dwarf planet by the International Astronomical Union (IAU). A decision that still remains controversial today.

Pluto was demoted because it did not meet the three criteria the IAU issued to define a full-sized planet. The three factors required to be classified as a planet, are firstly, it must orbit the Sun, secondly, it must be round in shape, and lastly, it must be able to clear the area around its orbit, by pushing other objects out of its way with its impressive size and gravity.

There are more than 200 moons in our Solar System. All of the major planets, except Mercury and Venus have moons. Pluto and some other dwarf planets, as well as many asteroids, also have small moons.

The Sun is a star along with billions of other stars in our Solar System.

Our Solar System is located at the edge of the Orion arm, one of the four arms of the spiral Milky Way galaxy.

The Milky Way galaxy contains some 100-400 billion stars, rotating around.

Astronomers nowadays have found more than 500 Solar Systems and are discovering new ones almost every year.

Scientists believe that there may be tens of billions of Solar Systems in our galaxy, perhaps even as many as 100 billion and they have not ruled out that some may contain life.

Mercury, the closest planet to the Sun, is as wide as the Atlantic Ocean and would would fit into Earth about 18 times.