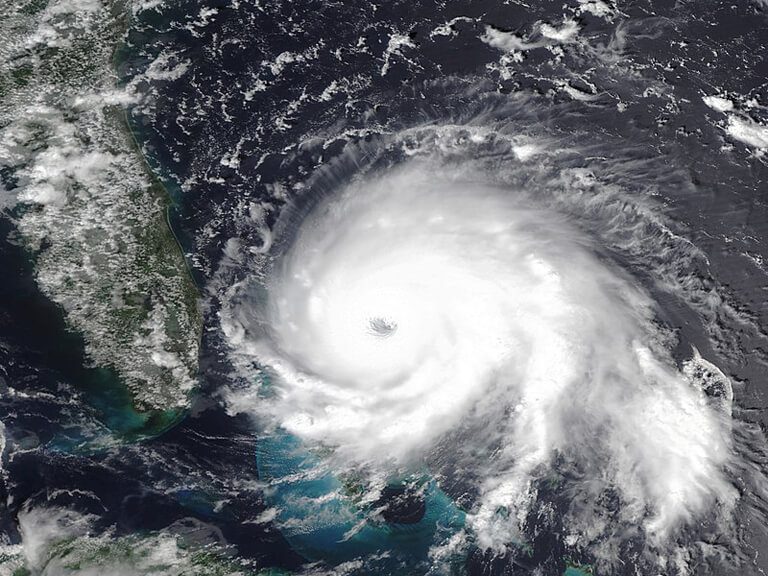 Hurricanes are the most powerful storms on Earth, so if they move on to land, they can cause great destruction with it’s violent winds and heavy rain. They can blow buildings down, uproot trees and toss cars and boats around as if they were toys.

The English word “hurricane” comes from the indigenous people of the Caribbean, known as “hurican”, who was the Carab Indian god of evil. They gave it this name because of its destructive power.

The scientific name for a hurricane is a tropical cyclone.

Hurricanes are called different names in different parts of the world. If they happen over the North Atlantic and Northeast Pacific oceans, they are called hurricanes.

If they happen in the Pacific and Indian oceans, they are called typhoons or cyclones. They may have different names, but they are the same type of storm.

To be classified as a hurricane it must have sustained winds above 74 mph. As most hurricanes destroy measuring equipment it is difficult to know how fast the winds are in a hurricane, but most scientists believe that the fastest winds are around 300 km per hour, with some possibly reaching up to 600 km per hour.

Hurricanes mostly begin over warm, tropical oceans. As the Sun warms the water and makes it evaporate into the air, cooler air then rushes in and fills the space it has left. This new air then heats up and rises as well, beginning a continuous cycle that forms clouds. The clouds then rotate because of the way Earth spins. As it swirls, and if there is enough warm water to feed it, a hurricane forms.

Hurricanes grow from tropical storms over the sea. While some storms stay over the ocean far from land, others shuttle towards shore at vast speeds of up to 300 km per hour.

The diameter of the hurricane is measured from one side to the other. Hurricanes can span a diameter of over 600 miles.

Hurricanes that form in the Caribbean and the Atlantic Ocean happens between June 1st and November 30th each year. This is called hurricane season.

For a hurricane to form the water surface needs to be 26 degrees Celsius or above. Nowadays as the Earth‘s climate is warming up, our seas will reach the temperature more often, resulting in more hurricanes.

Hurricanes can whip up massive giant waves, that crash in on coastal areas, causing massive flooding. These are called storm surges.

A storm surge during a hurricane can reach more than 6 meters (20 ft) high.

Some Hurricanes only last for days, whereas others can go on for weeks. The average lifetime is nine days. These facts are determined by the time and place of origin, and the rate of forward movement.

The longest hurricane ever recorded was 31 days. It was called Tropical Cyclone Ginger and it lasted from September, 5th – October, 5th in 1971. It formed northeast of the Bahamas moving onto North Carolina causing minimal damage.

In a hurricane the air is mostly rising, but right in the middle, the air sinks down creating a cloud free spot, called the “EYE” of the storm.

The cloud around the eye is the windiest and wettest part, called the “EYE WALL”.

The weather is much calmer in the eye itself. When the eye passes over land, people just feel a gentle breeze and the rain stops.

You can make your own mini-hurricane eye at home after a bath. When you unplug the bath and the water spirals around the plug hole, right in the middle of it there is a dry center, which is exactly just like the eye of a hurricane.

A hurricane weakens when it moves over land or over cooler parts of the ocean, when the supply of water vapor is reduced or cut off. It gradually loses power and eventually dies out altogether.

Hurricanes are giving boys and girls names by scientists. The reason for this is when anyone is talking about a particular hurricane, whether it’s you, me or a scientist, we will know which one it is. The names also go in alphabetical order.

Scientists don’t use the letters q,u,x,y or z for Atlantic hurricanes as there are few names starting with these letters.

A weather forecaster from Australia, named C. Wragge, was the first person to give names to hurricanes in the 1900’s.

The National Hurricane Center has a website which tracks and forecasts hurricanes. You can find out all the latest information about hurricanes.

The most deadliest hurricane ever happened was in Bangladesh in 1970. The Bhola Cyclone killed over 300,000 people.

The costliest hurricane in the world was hurricane katrina, in August 2005. The Category 5 hurricane made landfall on Florida, Louisiana, and particularly the city of New Orleans, causing catastrophic damage to the tune of $125 billion, and regrettably, over 1,800 fatalities.

The Saffir-Simpson Hurricane Scale is used to define hurricane strength by using categories.

Hurricane Ivan caused a record 127 Tornadoes to sprout over nine U.S states in 2004, causing $26.1 billion in damages and over 120 fatalities.

Nearly 90% of the deaths from hurricanes are a result of flooding, and not the wind.

Over the last 200 years, hurricanes have led to the death of around 2 million people.

In Australia hurricanes are called “WILLY-WILLIES”.

A large hurricane can release the energy of up to 10 atomic bombs every second.

A hurricane has been raging on planet Jupiter for more than 300 years, and it is the size of Earth.