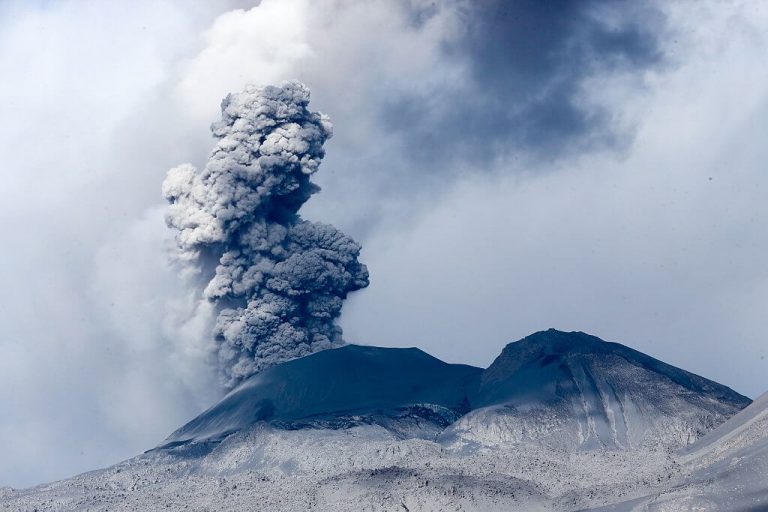 The word “volcano” comes from the Roman name “vulcan” – the Roman god of fire.

WHAT IS A VOLCANO ?

Volcanoes can be one of the most spectacular, magnificent and deadly natural event on our planet. They have been happening for millions of years and will continue to do so for millions more.

Volcanoes take place mainly at the boundaries where the Earth’s plates meet. The movement of these plates below the Earth’s surface causes red-hot molten rock to shoot through the Earth’s crust and fill the air with  gases.

Due to the intense pressure and extreme temperatures beneath the surface, eventually it forces this molten rock, called magma, upwards in a massive explosion, creating a volcano.

When it erupts it can eject lava as well as rocks and dust. (magma is lava once it is above the earth).

HOW DO VOLCANOES FORM ?

If we could dig through the Earth’s surface right in the center, we would find four different layers. It is the activity in these layers that causes earthquakes and volcanoes.

From the center outwards, the Earth’s layers are, the inner core, the outer core, the mantle and the crust. We live on the crust and it is the layer we know most about.

In the Earth’s crust there are numerous plates, which are all moving in different directions and at different speeds.

When these plates crash together, pull apart, or get jammed together and suddenly become free, this causes a volcano to erupt, ejecting lava as well as rocks and dust in a explosive fashion.

Over time, these all harden together and build up to become a distinctive volcanic landscape. 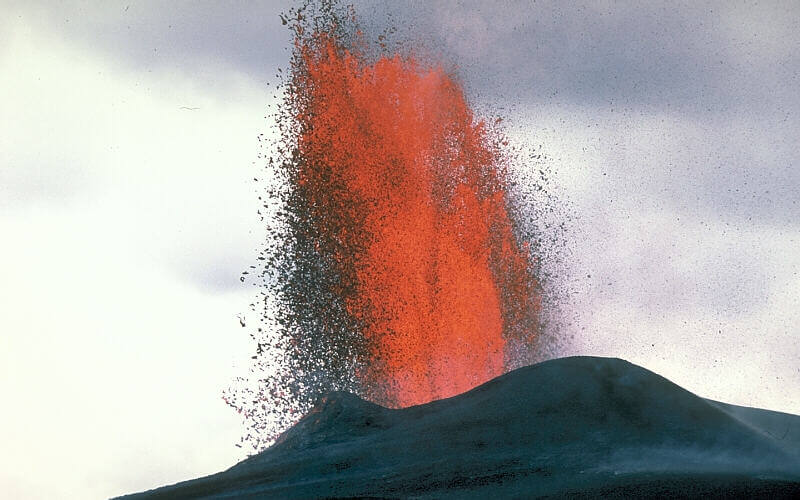 Magma is melted rock found under the ground. The temperature of magma ranges from 700-1300 degrees Celsius. When it cools down far below the surface, it forms into rock such as granite.

When magma bubbles up from the ground in a volcano at a melted state it is called lava.

As lava cools down it forms a different type of rock, such as basalt.

Magma’s original home is within the Earth’s mantle or crust, the layers just below the Earth’s surface.

There are several different types of volcanoes, but despite them all having different shapes and characteristics, they all have one feature in common.

While the sides of all volcanoes are made up of different materials, they all have a hole (vent) at the top of them, from where the magma comes up to the surface.

As the magma differs in its chemical composition and temperature, these effect the shape and size of volcanoes.

The 4 major types of volcanoes !!!

These are the simplest type of volcano, which form into a circular or oval-shaped cone that rarely grow more than 1,000 feet.

An example of a cinder cone volcano is Cerro Negro. This active volcano can be found in the Cordillera de los Maribios mountain range in Nicaragua.

These make up some of the world’s most remarkable mountains, take Mount Rainier and Mount Fuji for example.

Composite volcanoes have alternate layers of lava and ash, making it stronger and less likely to erode over time, and they can grow thousands of meters tall.

These are broad volcanoes that actually looks like a shield from above. One example is Surtsey, located off the west coast of Iceland.

Surtsey erupted in 1963, and has become one of the world’s newest islands and is now one of the most researched places on Earth.

These grow much quicker than any other volcano. They are not strong and easily weather away in a few years after eruption.

One strange eruption of an ash and cinder volcano happened without warning in a farmers field in Mexico, 1943. It grew over 400 meters in its first eruption and was giving the name Paricutin.

The hotter the lava, the thinner and runnier it is, so the faster and further it flows.

The world’s largest active volcano is Mauna Loa in Hawaii. It is 13,677 feet above sea level, but from its base below sea level, it is taller than Mount Everest.

A dormant volcano is one that hasn’t erupted in the last 10,000 years, although it is expected to erupt again at some stage.

An area in the Pacific Ocean is called The Ring Of Fire. This region is home to 452 volcanoes, and to over 50% of the world’s active and dormant volcanoes.

A tsunami is a large ocean wave, and it is normally caused by an underwater earthquake or a volcanic explosion.

An active volcano is one that erupts regularly.

Most dormant and active volcanoes are now popular tourist attractions, with many climbers scaling the mountain top. Mount Fuji in Tokyo, Japan is an example.

A pyroclastic flow is what rolls down the side of a volcano at high speeds after it erupts. It contains boiling hot volcanic ash, dust, dense gases and other fragments.

A lahar is a nasty type of mudflow containing slurry, rock debris, water and other volcanic materials that flow down from a volcano.

The only good factor after a volcano erupts is that it can create very fertile land, which is useful for cultivation.

Volcanic ash is very small fragments of rock or lava blasted into the air from a volcanic explosion. This ash can be very dangerous and makes it harmful for people to breath and for airplanes to fly through.

An enormous ash cloud shut down most of Europe’s airports for numerous days in 2010, after a volcano erupted in Iceland.

Mount Pinatubo erupted in the Philippines on June 15,1991, producing high-speed avalanches of hot ash, gas, massive mudflows and a huge cloud of volcanic ash stretching hundreds of miles across. More than 700 people perished during the eruption, with 100’s more injured, while it also left more than 200,000 people homeless.

A volcano on the Atlantic island of La Palma – part of Spain’s Canary Islands – began to erupt on September 19, 2021. It forced over 7,000 people (of the 85,000 who live on La Palma) to evacuate the scenic island. Thankfully, no deaths or major injuries have been linked to the eruption, although it is estimated to have caused over $900m of damage to the island’s infrastructure.