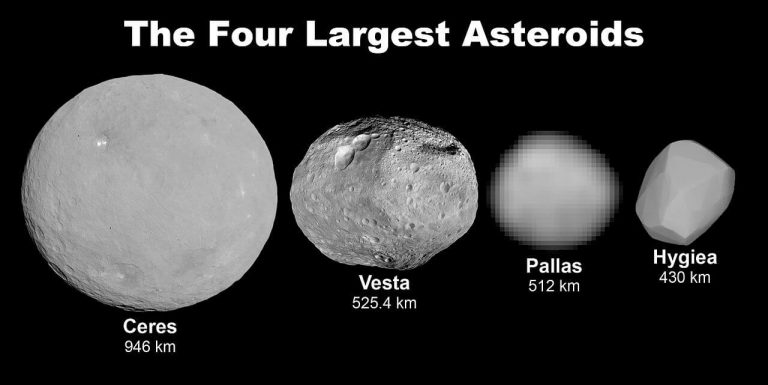 Asteroids means “like a star” in the ancient Greek language.

Asteroids are made up of metals and rocky materials.

Besides planets and moons, there are millions of smaller rocky objects in the solar system. These are called asteroids.

Most asteroids travel together in the Asteroid Belt, which is a wide circular track of rocks, travelling at different speeds around the Sun.

Asteroids are spare parts that were left over when the moons and planets were formed in the solar system over 4.5 billion years ago.

Asteroids vary in size, from almost 1000 km in diameter, down to small rocks, measuring just 1 meter in diameter.

Ceres is the largest object in the asteroid belt, measuring 974 km in diameter.

Ceres is the only dwarf planet inside the asteroid belt.

As the asteroids travel around the Sun, there is normally thousands of kilometers between them.

As asteroids orbit the Sun they tumble and spin. 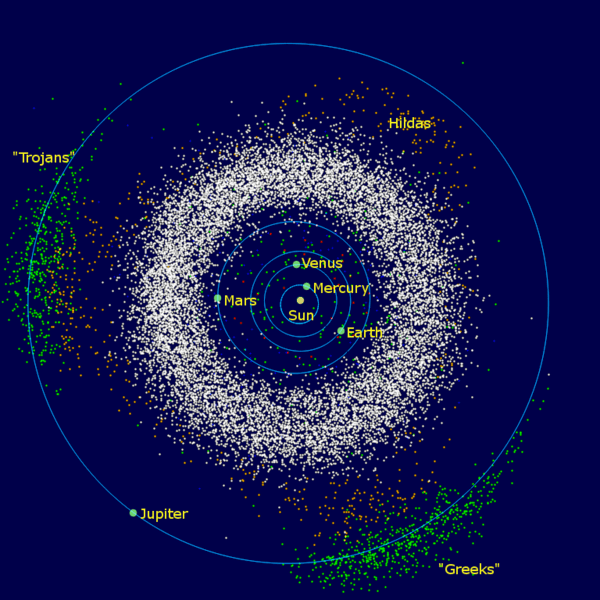 The asteroid belt sits between the orbits of the planets Mars and Jupiter.

Not all asteroids live in within the asteroid belt. Some move around on their own. These asteroids gets pulled towards moons and planets by their stronger gravity. The small pieces of dust and rock that break off from the asteroids are called meteoroids.

Most meteoroids burn up when they get into the Earth’s atmosphere, but some large chunks manage to escape and hit the Earth’s surface from time to time. These are called meteorites.

When a meteorite burns up in the Earth’s atmosphere, it leaves a long streak of light in the sky. These streaks are called meteors, but are also called shooting stars.

Occasionally an asteroid will get bumped out of its belt and starts journeying through the solar system. About once every 1,200 years they will collide with Earth.

An asteroid narrowly missed Earth in 2013. It was 45 meters wide and scientists reckon if it hit our planet it would have exploded with the force of hundreds of atomic bombs.

Some scientists believe that an asteroid collided with Earth and wiped out the dinosaurs over 65 million years ago.

The asteroid called Ida could be bigger than London. It also has its own moon, called Dactyl.

It is believed that more than 150 asteroids have a small companion moon, with some having two.

As an asteroid is a chunk of rock and metal, their shapes vary. Most are lumpy and shaped like gigantic potatoes.

Scientists believe that the Chicxulub crater in Mexico, was caused by a big asteroid hitting Earth over 65 million years ago, leaving a gaping crater 93 miles in diameter.

Asteroids are also known as planetoids or minor planets.

N.A.S.A launched the Dawn Mission in 2007, to send a space-probe to Vesta and Ceres. This allowed Dawn to orbit Vesta, photograph and map it, and then very gently fly to Ceres and orbit that. In 2011, Dawn arrived at Vesta, and in 2015, it went into orbit around Ceres. The mission became the first to visit a dwarf planet.

The first asteroid was discovered by Italian astronomer Giuseppe Piazzi in 1801.

The asteroid belt is estimated to contain up to 2 million asteroids larger than one kilometer in diameter, and millions of smaller ones.

These days, astronomers use computerized telescopes to find thousands of asteroids every month.

On the 6th December, 2020, a space probe carrying samples from an asteroid called Ryugu, was retrieved from the Australian outback after a six-year mission. The capsule from the unmanned Hayabusa2, carried the first extensive samples of dust from an asteroid. According to Japan’s space agency, the capsule’s samples could contain clues to the origin of the solar system. The samples were taking to a research facility owned by the Japanese Exploration Agency (JAXA).

On the 23rd of November, 2021, NASA made it’s first attempt to deflect an asteroid for the purpose of learning how to protect Earth, though this particular asteroid presents no threat. The DART probe, launched from Vandenberg Space Force Base in California, will crash into the asteroid (called Dimorphos) in September of 2022, while a nearby satellite captures it on camera.

NASA successfully crashed a spacecraft into a small asteroid on the 27th of September, 2022, as part of a mission to test whether dangerous incoming rocks can be deflected by smashing into them. The spacecraft, known as Double Asteroid Redirection Test (DART) collided with the 170-meter wide asteroid, named Dimorphos, at roughly 23,500 km/ph. It will take months for scientists to find out if the crash altered the orbit of the asteroid.

NASA confirmed on the 12th of October, 2022, that the DART probe’s crash into an asteroid successfully changed its course. The successful targeting, impact and now-confirmed course change demonstrated in spectacular fashion the viability of at least one technique for pushing a threatening asteroid or comet off course before it might slam into Earth with potentially devastating results.