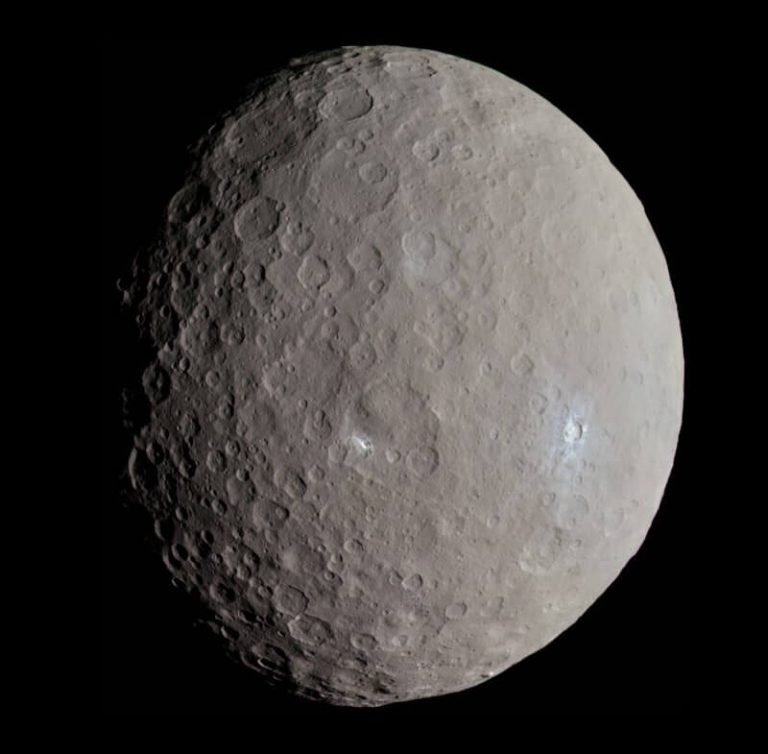 Ceres is classified as a dwarf planet.

Ceres was originally considered a planet, but was reclassified as an asteroid in the 1850’s, and since then, due to its vast size it has been classed as a dwarf planet.

Even though Ceres was classified as a dwarf planet by the IAU in 2006, some scientific sources sill list Ceres as as asteroid.

The International Astronomical Union (IAU) decides the rules to what makes a planet. If they do not fit the three criteria required, they were giving the name of a dwarf planet.

The three criteria required to be called a planet by the IAU are, firstly, it has to orbit the Sun, secondly, its shape should resemble a ball like figure, and thirdly, it must to be able to clear the area around its orbit, by pushing objects out of its way with its impressive size and gravity.

Ceres lives in the asteroid belt.

The asteroid belt is a wide, circular track of rocks, which are racing at different speeds around the Sun.

Ceres is the largest object in the asteroid belt.

Ceres sits in the asteroid belt between the planets Mars and Jupiter.

Ceres is one of five planets recognized as a dwarf planet. The other four are Eris, Makemake, Pluto and Haumea.

Ceres is the closest dwarf planet to the Sun.

The order of the dwarf planets on their travels around the Sun outwards is Ceres, Pluto, Haumea, Makemake and then Eris, being the farthest from the Sun.

The diameter of Ceres is approximately 587 miles (945 kilometers) wide, making it the smallest of the dwarf planets.

Ceres is known to have a rocky core, an icy inner mantle, and possibly some surface liquid water, with a dusty top layer.

Both Ceres and Earth use the Sun as a key heat source.

Ceres does not have any moons. 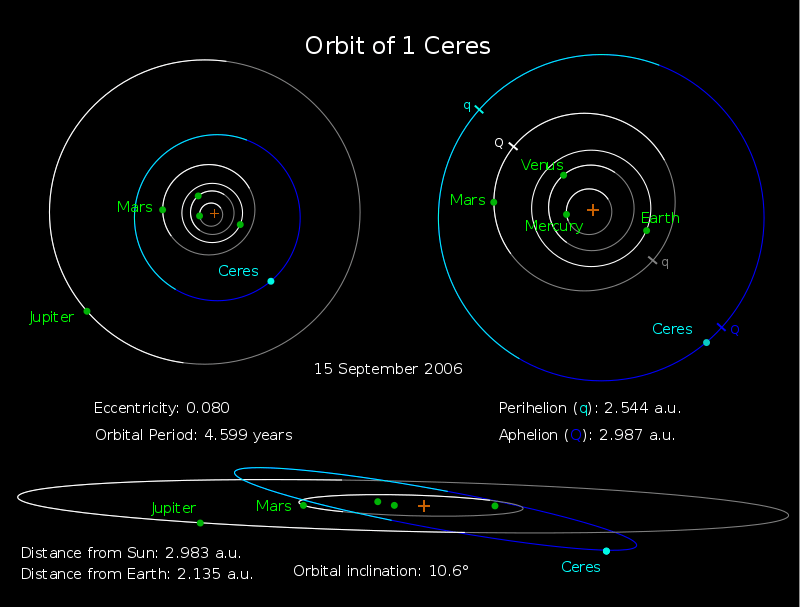 Ceres completes one rotation around its axis every 9 hours, making its day length very short.

The orbit period of Ceres on its travel around the Sun is 4.6 Earth years.

The temperature on Ceres changes during daytime from about -100°F, to night time temperatures of -225° F.

Ceres gravitational pull is 0.028 times that of Earth.

Ceres was discovered by astronomer Giuseppe Piazza in 1801.

Ceres in ancient Roman religion was a goddess of agriculture, grain crops, fertility and motherly relationships.

Ceres has a conical mountain called “Ahuna Mons”. It is estimated to be about 4 miles high, and about 10 miles wide at the base.

NASA launched the space probe Dawn in September 2007, on a mission to explore the two largest objects in the asteroid belt, the asteroid “Vesta,” and the dwarf planet  “Ceres.” It finally entered Ceres orbit on March 6, 2015, with its mission to gather data to aid further understanding of the planets composition, internal structure, density and shape.

The visit of Dawn to Ceres in 2015 achieved a milestone, making it the first ever spacecraft to visit a dwarf planet.

As NASA’S Dawn reached Ceres, astronomers found two surprise spots inside a crater. The bright spots indicate a reflective material, most likely to be ice, water or salts. The researchers hope Dawn will solve the mystery.

The space probe Dawn was retired in 2018, and is currently in uncontrolled orbit around Ceres.

In 2015, the European Space Agency’s Herschel Space Observatory discovered water vapor plumes on Ceres, the first evidence of water to be found in the asteroid belt.

With the discovery of water on Ceres, it raises interest as a possible location for human conquest, or maybe it was, or is, home to alien life.

At this time there is a lot of mystery surrounding Ceres.