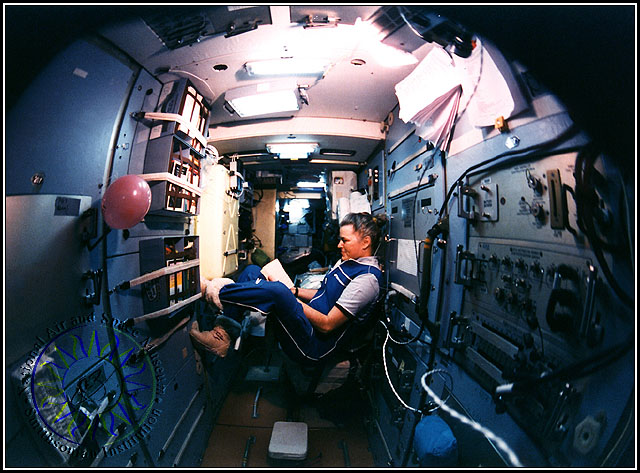 INTERESTING FACTS ABOUT LIVING IN SPACE !!!

Astronaut’s can spend weeks or even months living and working in space.

Just recently, U.S. astronaut Christina Koch, returned to Earth after spending almost a whole year aboard the International Space Station, shattering the record for a female astronaut in space.

The record for the most consecutive days in space goes to Valeri Polyakov, the former Russian cosmonaut, who spent nearly 14 months (437 days) in the Mir Space Station, between 1994/95.

The Russian Space Station Mir, was the first modular space station that operated in low Earth orbit from 1986 to 2001. It was operated by the Soviet Union before the state’s dissolution in 1991.

For near on 20 years, the Americans and the Soviets/Russians were the only countries with astronauts. Nowadays, dozens of nations from all around the world have seen their citizens fly in space on American or Russian spacecraft.

These days, astronauts and cosmonauts travel to, and stay on a large spacecraft called the International Space Station that orbits around Earth.

Since 2000, there have always been humans living and working on the International Space Station.

The International Space Station is called “ISS” for short.

The International Space Station is an amazing work of art. The station was constructed in space and is about the size of a football pitch.

Since 1998, it has taken over 40 different launches to completely assemble the station.

The astronauts on board the ISS spend their days carrying out scientific experiments, maintaining the station, and making sure it stays in perfect working order.

For astronauts living in space, they see the sunrise every 90 minutes.

Astronauts work in space is similar to what they would do on Earth. They work from nine to five, mainly to keep their days in order.

Astronauts put on their spacesuits on hours before going on a spacewalk, during which time, they breathe pure oxygen in preparation for their activity.

Spacesuits protects astronauts from extreme hot and cold temperatures, harmful space dust and radiation, while also providing oxygen to breath, and water to drink during spacewalks.

The main difference between life on Earth and in space is weightlessness. Once a spacecraft reaches orbit, anything or anyone that is not tied down will float.

Everything an astronaut might need in space is provided by the Space Agency he or she is flying with. They might be allowed to take a personal item or two with them, but they must be small and light.

Everything we do on Earth to stay alive, astronauts have to do the same in space. They have to breathe, eat, keep clean, stay healthy and use the bathroom.

Astronauts use toothpaste and toothbrushes like you would on Earth. However, there is no sinks or showers, so they have to spit into a washcloth. They also use special kinds of soap and shampoo that don’t need water to rinse. After washing, they use a towel to dry off.

Although there is no sinks or showers on the ISS, there is two toilets for privacy. The astronauts fasten themselves to the toilet, so that, their body won’t float away.

The also use wipes to clean walls, floors, and windows. They use a special soap that kills germs.

Astronauts use a vacuum cleaner in space. They use it to keep dust out of the air, and to catch floating objects that are out of reach.

Astronauts sleep in sleeping bags that are strapped to the walls of their  sleeping quarters.

Sleeping quarters are phone-booth sized rooms that can also hold a computer, clothes, books, and other small items.

Simple everyday tasks, such as breathing has to be carefully thought out in space. Astronauts use up oxygen and breath out carbon dioxide, so are in danger of suffocating. To counteract this, fresh oxygen is constantly circulated around the spacecraft.

The ISS has a complex wastewater recycling system on board. Any water it can access, such as residue from hand washing, people’s breath, astronauts sweat, and even urine is recycled to make drinkable water.

NASA says the recycled water on the ISS is actually cleaner than what most people drink back down on Earth.

Air is used, rather than water, to suck and not flush body waste away.

Astronaut’s in space will drink up to eleven liters of water a day.

Astronaut’s diet in space is very similar to what we eat on Earth, such as frozen vegetables, desserts, dairy products and fruit. An astronauts menu in the ISS would easily consist of a 100 items.

All meals are prepared long before launch. Packaged foods are either ready to eat, may just need heating up, or might need water added.

They can spice up their meals with salt and pepper, but only in liquid form, as sprinkled grains would float away and block vents.

Three meals a day provide astronauts with the required intake of 2,800 calories.

In space, astronauts grow up to 5 cm or (2 in) taller than they are on Earth. This is because their backbone lengthens in space.

Nearly every astronaut experiences some space sickness due to the effect of no gravity. Most symptoms would be nausea, headaches, and even trouble locating your limbs.

In weightlessness, floating causes all fluids to shift upward in your body, causing a puffy face and nasal congestion. Plus, as there is no weight load on the back or leg muscles, they can weaken or shrink. To counteract this, they do about two hours of exercises daily.

Several astronauts have reported that when they come back down to Earth, the hardest thing they found about re-adjusting was that if you let go an object, it falls.

Nowadays, astronauts can send e-mails and talk to their families over video links. They can also receive regular deliveries of mail from visiting crews. Wow, how times have changed.