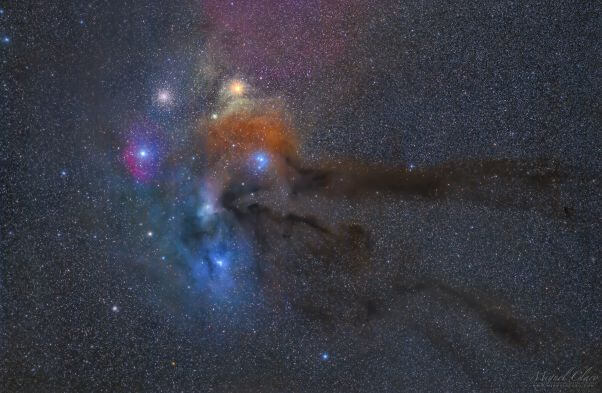 On a clear night we are able to see many bright objects in the sky. All these objects are in space.

Space is where all of the asteroids, planets, comets, stars, solar systems and galaxies in our universe are found.

Staring into space all the objects look like tiny dots to us. This is because they are so far away, and most of the objects are extremely large.

Up in space there are enormous areas of nothingness.

Officially space starts 60 miles or 100 kilometers above our head. This is where the shell of air around our planet disappears.

Where space begins is called the Kármán line.

Geospace is the region of outer space near Earth. This includes the upper atmosphere, the ionosphere as well as the magnetosphere.

We use the word space to refer to everything that lies outside our own world.

The Moon is the closest object to us in space. It is a lot closer to us than the Sun. Although it looks quite big in our sky, it is actually many times smaller than the Sun.

Beyond Earth there are many colorful massive objects. There are others that are distant and mysterious which are all moving, and in between them there are massive enormous gaps that we call space.

Day and night, light is something that travels through space. All the light we receive comes from the stars (Sun). We can only see light when it hits an object and bounces of it. (we need light to see)

The Sun is the star at the center of our solar system.

Earth is nice and bright because light can bounce of tiny specks called particles in the atmosphere around it. Space is empty, so there are no particles for the light to hit.

Planet Earth turns and travels in space, but here on the ground we cannot feel it moving.

Earth is full of air, which enables us to hear all different types of sounds. When something makes a sound, the noise spreads out into the air around our ears. In space there is no air, so if we were to take an entire orchestra into space and we sat beside them, we would not hear any of the music.

Any free-moving liquid in outer space will forge itself into a sphere.

Nobody knows how many stars are in space.

There are more stars in the universe than grains of sand on all the beaches on Earth.

There are billions of galaxies within space. Earth’s galaxy is called The Milky Way.

The first time anything man made by humans touched the outer space was in 1957, when Russia launched its first satellite Sputnik.

Astronauts in space can gaze back down to Earth and admire the blue – green beauty of the planet we call home. They can see swirling clouds and lights from the cities below. They might even see meteors, which are tiny rocks in space, burning up as they enter the Earth’s atmosphere.

Sixteen countries worked together to build the largest single structure humans ever put into space. The International Space Station (ISS) first launched in 1998, and was completed in 2011.

Today astronauts can spend week or even months living and working in space, thanks to space stations.

People grow about five centimeters taller when they are in space.

Space smells like gunpowder according to three-time spacewalker Thomas Jones. A spacewalker is an astronaut who is active outside a spacecraft in outer space.

People one day might go for a holiday in space. Some day there might be hotels that drift in orbit around Earth, with sightseeing tours of the Moon.

Footprints left on the Moon will not disappear as there is no wind.

As there is no gravity in space, astronauts use sleeping bags as beds, with body straps to keep them from floating around as they rest.

On Sunday, July 11th, 2021, British billionaire Sir Richard Branson reached the edge of space on his rocket plane. The VSS Unity spaceplane was launched in mid-air after dropping from the belly of its mothership at an altitude of about 9.4 miles (15km) before its rocket fires the craft and its crew into sub-orbit space at least 55 miles (88km) above the Earth. Richard Branson’s company Virgin Galactic’s main aim is to be operating multiple space tourism flights a year, and already has more than 600 customers for the $250,000 seats-including Justin Bieber and Leonardo DiCaprio.