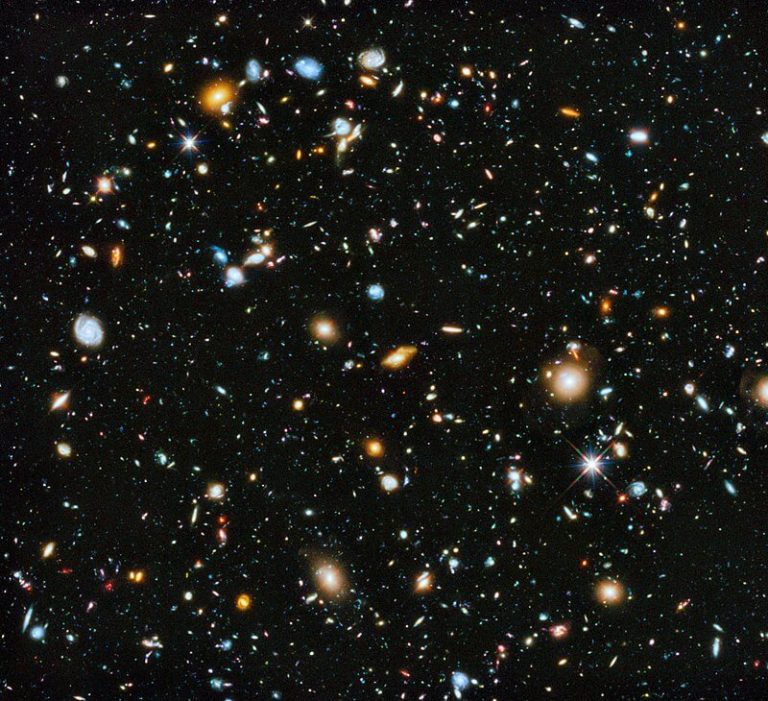 INTERESTING FACTS ON THE UNIVERSE !!!

The Universe is hard to imagine how enormous it actually is, because it seems to have no beginning and no end – it is everything that exists, which includes the things we cannot even see.

Scientists and astronomers believe that 95% of the Universe is invisible.

Only 5% of the Universe is visible from Earth.

The Universe was formed millions and millions of years before our Solar System was formed.

The Universe comprises of just empty space, but there are billions and billions of galaxies floating around in the Universe, such as the Milky Way. These galaxies contain millions of stars of all different ages, and comprise of special families, such as our Solar System.

The Milky Way is the galaxy that contains our Solar System.

It takes the Sun 225 million years to perform a complete circuit of the Milky Way.

To date, astronomers have found more than 500 Solar Systems, and every year they are finding more. Scientists believe that there may be tens of billions of Solar Systems in our galaxy alone.

The Universe was formed in a fraction of seconds.

Numerous scientists believe our Universe was born billions of years ago, in a event called the Big Bang. They believe the energy released from the Big Bang created hot materials, which later formed all the planets, moons, stars and galaxies in the Universe.

Shortly after the Big Bang, when the Universe was formed, everything in it was close together, but as time has passed, these have spread further apart, which suggests the Universe is getting bigger all the time.

The Hubble Space Telescope, the most powerful telescope in space was launched in 1990, at the cost of $1.5 billion. After numerous setbacks, the Hubble captured some incredible photographs of the Universe in 1993. It has led to all kinds of amazing discoveries, such as the age of the Universe, which they calculate to be around 13.7 billion years old. It also helped scientists figure out that the expansion of the Universe is speeding up, rather than slowing down.

The Hubble Space Telescope was named after American astronomer Edwin Hubble. He is regarded as one of the most important astronomers of all time. He was the person who proved that the Universe is expanding and getting bigger all the time, by using a blurry telescope from Earth. Unfortunately he died in 1953, and who knows what he might have discovered, if he had of been alive when the Hubble space telescope was launched in 1990.

On December 25th, 2021, NASA launched the James Webb Space Telescope, the most powerful telescope ever launched into space. The new telescope is at least 100 times more powerful than the Hubble Telescope.

At a cost of around $10 billion, the telescope is an international project led by NASA in collaboration with the European Space Agency, and the Canadian Space Agency.

The telescope, named after James E Webb, a NASA administrator from 1961-1968, and who was also a key figure in the Apollo mission, should be operational around the end of June 2022.

At a distance of more than one million miles away, the telescope is more than four times further away than the moon and is too far for any repairs to be carried out. However, after a very successful launch, NASA is confident that it will have a lifespan of 10+years.

There are more stars in the Universe then there would be grains of sand on all the beaches on Earth.

About 275 million new stars are born each day.

The majority of the Universe is made up of dark matter and dark energy.

Dark matter – Scientists believe around 27% of the Universe is made up of dark matter, which gets it’s name because it cannot be seen with any instrument that we have today.

The composition of our Universe is 68% dark energy, 27% dark matter and normal matter is 5%.

Normal matter consists of the atoms that makes up everything we can see, smell, or touch. For example, stars, planets, trees, animals and human beings.

The vast empty space in our Universe between galaxies is known as the void.

There could be an infinite number of Universes out there.

The Universe has the same temperature everywhere.

Space is completely silent because there is no air in space. With no air, sound has no way to travel to be heard.

The footprints left behind on the moon by astronauts won’t disappear as there is no wind.

The biggest mountain in our Solar System is on Mars.

It would take a spacecraft about 450,000,000 years to travel to the center of our galaxy, the Milky Way.