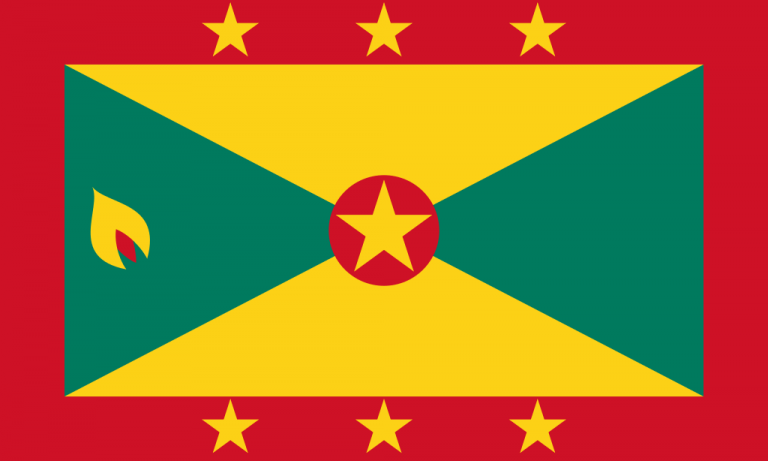 Grenada is an island country, consisting of the island of Granada and six smaller islands in the southeastern Caribbean Sea.

Grenada is located between the Caribbean Sea and the Atlantic Ocean. It is northwest of Trinidad and Tobago, northeast of Venezuela and southwest of Saint Vincent and the Grenadines. A BRIEF HISTORY OF GRENADA !!!

The early inhabitants of the island were the peaceful Native American Arawak tribe, however, when Christopher Columbus first spotted the island in 1498, it was settled by Carib natives, who had displaced the earlier population of Arawak’s.

Due to the vast number and violent nature of the Carib people, it would be some time before the island was settled by European settlers.

The name Grenada, was giving by Spanish sailors who were passing by, and found it looked similar to their own city at home (Granada).

For years, both the British and the French competed for the island and failed, due to the resistance of the warlike Caribs.

However in 1674, the French conquered the Caribs, established settlements and gained control of the Island. Most of the surviving Caribs took their own lives, rather than submit to the colonists.

By 1753, with the help of 12,000 African slaves working in the sugar plantations, Granada was thriving under French control. (slavery was abolished in 1834).

The British took control of the island in 1762, after defeating the French during the Seven Years War. Grenada was formally ceded to Great Britain in 1763, by the Treaty of Paris.

With the island now a British colony, they introduced the cultivation of cotton, cacao and nutmeg. Even up this day, Grenada is still a leading supplier of these products.

The French would briefly assume control of the island once again from 1779-1783, until it was restored back to Britain, by the Treaty of Versailles in 1783.

Grenada gained their independence from Great Britain in 1974, although it became a constitutional monarchy, with King Charles III as head of state.

On October 25th, 1983, the U.S military forces invaded the island, after a military coup by the nation’s pro-Marxist regime. The reason giving was for the threat posed to American nationals living on the island.

The date of the invasion is now celebrated as a national holiday in Grenada, called Thanksgiving Day.

About 2 million years ago, it is believed Grenada was formed as an underwater volcano.

Grenada is located between the Caribbean Sea and the Atlantic Ocean. It is northwest of Trinidad and Tobago, northeast of Venezuela and southwest of Saint Vincent and the Grenadines.

The tiny Caribbean island of Grenada is one of the smallest independent countries in the western hemisphere.

Grenada is divided up into six parishes. The largest is St George, others include, Saint Andrew, Saint Patrick, Saint John, Saint David, and Saint Mark. The coastline in Grenada is 121 kilometers (75 miles) long.

Grenada is also called the “spice islands” because it grows spices, like cinnamon, cloves, nutmeg and allspice berries. It is one of the world’s largest exporters of these spices.

Grenada’s wildlife is varied from the rare nine branded armadillo, to the cheeky mona monkeys. You will also see iguanas, lizards, snakes (non-venomous), toads and also the red-legged tortoise.

There are about 150 bird species that call Grenada their home.

The national bird of Grenada is the critically endangered Grenada dove.

Leatherback turtles, dating back to the year of the dinosaurs, can be seen on the beaches of Grenada. They are critically endangered, with only 35,000 female leatherback turtles left in the world today.

Grenada is volcanic in origin, with a ridge of mountains running north and south. It has a stunning landscape, and about 10,000 acres (4,000 hectares) of forest.

Hurricane Ivan, caused havoc to the island of Grenada in September 2004, killing at least 39 people, and it totally destroyed the infrastructure of the island. Total damage was estimated to be about $815 million.

The highest mountain in Grenada is called Mount Saint Catherine, it reaches a height of 2,760 feet (840 meters).

Snorkeling and scuba diving is very popular with the tourists that visits Grenada every year.

The beautiful Caribbean nation ticks all the boxes when it comes to your perfect vacation, from the tropical nature, to the tasty cuisine, and the wonderful friendly people.

Grand Anse, is Granada’s most famous beach. The three kilometer coastline of golden sand and turquoise seas, boasts the islands best resorts and restaurants along its shore.

St George is the yachting and charter boat center of the eastern Caribbean.

Medical and dental treatment in government hospitals and clinics in Grenada is free. Primary and secondary education is also free.

The U.S.A is a major trade partner of Grenada. Most of its goods are imported from the U.S.

In 1974, Grenada attained independence within the Commonwealth and membership in the United Nations.

Heartbreak Ridge is a movie that is based on the U.S.A’s invasion of Grenada.

Most of the population here have descended from African slaves.