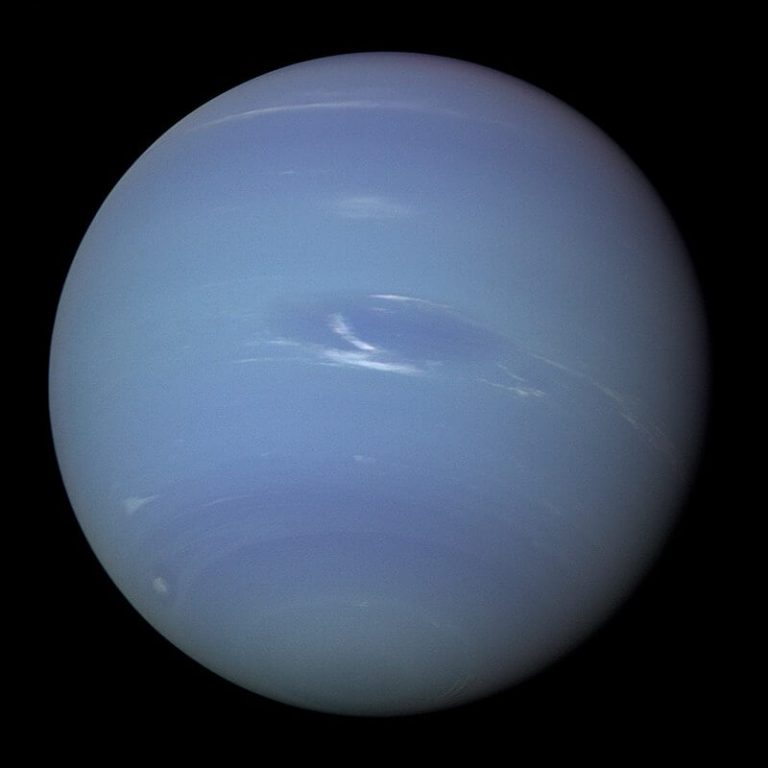 Neptune is the eight, and farthest-known planet from the Sun.

From the Sun, the eight planets are: Mercury, Venus, Earth, Mars, Jupiter, Saturn, Uranus and Neptune. Jupiter, Saturn, Uranus and Neptune are know as the Outer Planets.

Neptune and Uranus are known as distant twins, however, looks hide many differences.

Neptune, Uranus, Jupiter and Saturn are know as the four Gas Giants.

Neptune’s atmosphere is made up of hydrogen, methane and helium. These components, especially methane, are what give the planet its blue color.

The secret behind what gives ice planets Neptune and Uranus their distinctive blue hues has been discovered by Oxford University scientists. Neptune is a deeper blue than Uranus because it has a thinner layer of haze. The haze of these ice giants forms an atmospheric curtain which gives them their distinctive blue color. Neptune doesn’t have a solid surface as most of its mass is made of gases,

Neptune has at least five rings which are very faint. They are made up of very tiny dust like particles.

Like Earth, Neptune rotates on a slight tilt as it travels in space.

Neptune is the windiest planet in our solar system.

A Neptune year is the same as 165 Earth Years.

A Neptune day is 16 hours and 7 minutes.

Neptune is about four times wider than Earth.

The largest of Neptune’s moons is Triton.

An orbit is a journey/path that an object takes in space. For example, stars, planets, asteroids, moons or spacecrafts.

Similar to Earth, Neptune has clouds and storm systems that revolve around the planets atmosphere.

Neptune is 4.5 billion kilometers away from the Sun, which means it is very cold.

As Neptune is so far away from the Sun, it has a high proportion of ice present, due to the extreme cold conditions.

Neptune is the coldest planet in the solar system.

Neptune is 30 times further away from the Sun, than Earth.

Neptune is named after the Roman God of the Sea.

Astronomer, Johann Galle saw Neptune for the first time through a telescope in 1846. He named it after the Roman God of the Sea, due to it’s bright blue color.

Neptune has only been visited once, by the same Voyager 2 that took the only photos of Uranus, Saturn and Jupiter.

The Voyager 2 was launched in 1977, to study the giant planets in our solar system. It passed Neptune in 1989, and is now passing through the outer reaches of the solar system, transmitting scientific data back to NASA.

Neptune was originally called “Le Verrier,” named after the man who predicted it, Urbain Le Verrier, a French mathematician and astronomer. Both Le Verrier and John Adams, another mathematician from England, had realized that a hidden planet was pulling on Uranus, causing it to speed up and slow down. So basically, Neptune was predicted before it was directly observed by Johann Galle in 1846.

Pluto was once known as the ninth planet. Then in 2006, it was downgraded from a planet to a dwarf planet, by the International Astronomical Union (IAU), because it could not meet the three criteria the IAU uses to define a full sized planet.

The three factors that are required to be called a planet by the IAU are firstly, it has to orbit the Sun, secondly, its shape should resemble a ball like figure, and lastly, it must be able to clear the area around its orbit, by pushing other objects out of its way with its impressive size and gravity.

Pluto was downgraded from a planet to a dwarf planet because it could not clear the area around its orbit, by pushing other objects out of its way with its impressive size and gravity.