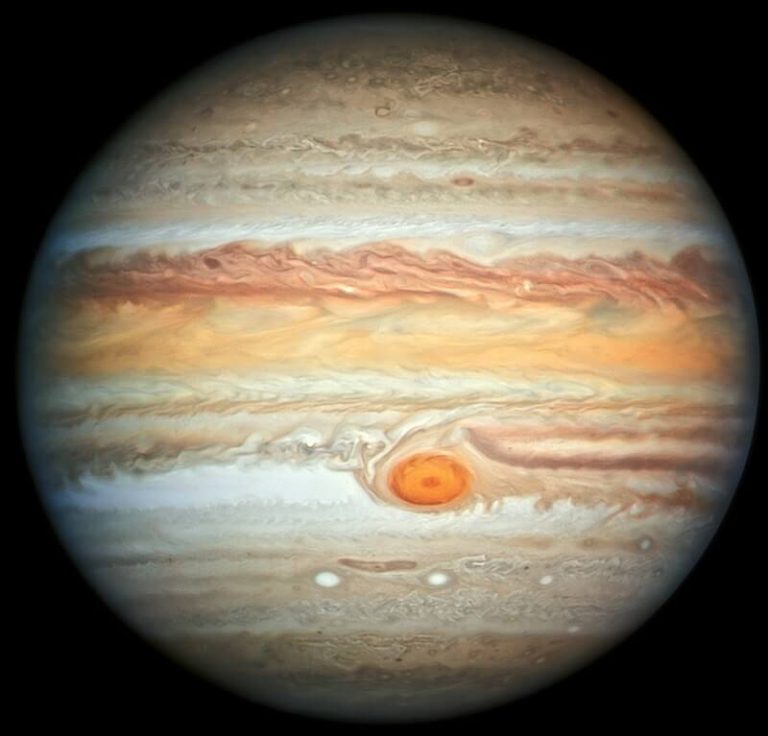 Jupiter is the largest planet in our Solar System. It is so big that all of the other planets could fit inside it.

Jupiter is the fifth planet from the Sun.

The order of the planets in the Solar System, starting nearest the Sun and working outward is: Mercury, Venus, Earth, Mars, Jupiter, Saturn, Uranus and Neptune. Pluto was once considered the 9th planet of the Solar System. In 2006, it was downgraded from a planet to a dwarf planet by the International Astronomical Union (IAU), because it could not meet the three criteria the IAU uses to define a full sized planet.

The three criteria required to be recognized as a planet by the IAU are, firstly, it has to orbit the Sun, secondly, its shape should resemble a ball like figure, and lastly, it must be able to clear the area around its orbit, by pushing other objects out of its way with its impressive size and gravity.

Pluto was downgraded from a planet to a dwarf planet because it could not clear the area around its orbit, by pushing other objects out of its way with its impressive size and gravity.

Jupiter has very bright red and yellow clouds drifting around in it’s atmosphere, making it one of the most colorful objects in space.

It is the fourth brightest object in the sky, visible to the naked eye.

Jupiter has 79 known moons. 53 of them are named, while the other 26 are awaiting official names.

Four of Jupiter’s moons are the size of planets.

Europa – Jupiter’s fourth largest moon’s surface is completely covered in smooth ice. Information sent back from the Galileo spacecraft, have shown that there could be a layer of water under the ice to which some scientists believe might be home to some kind of life – beneath the icy crust.

Jupiter’s moon, Ganymede, is the largest moon in the Solar System. It is even bigger than Mercury, but due to the fact it does not orbit the Sun by itself, it cannot be called a planet.

Ganymede is made of a mixture of rock and ice.

Io, one of Jupiter’s biggest moons, is the most volcanically active body in the Solar System.

Scientists believe Jupiter protects the Earth from asteroids – it absorbs them before they reach us.

Jupiter belongs to a group called the gas giants. This is a family of planets that also includes, Saturn, Uranus and Neptune. They are very different to Earth’s rocky surface. The gas giants all have a hard center, but their top layers are composed mostly of gases, such as hydrogen and helium, with a relatively small rocky core.

Jupiter is named after the king of the Gods in Roman mythology.

More than 1,300 Earths would fit inside Jupiter.

The average temperature on Jupiter is a chilly -234° Fahrenheit.

Jupiter orbits the Sun at a distance of about 778 million km (483 million miles).

Jupiter is so far away from the Sun that it takes 11.86 Earth years to make one trip around the Sun. This is quite long in comparison to it’s short days.

When viewed from Earth, Jupiter appears to move very slowly. It’s no wonder it takes nearly 12 Earth years to make one trip around the Sun.

A planet’s year is the time it takes to complete a single orbit around the Sun.

One day on Jupiter is 9 hours and 55 minutes, meaning it rotates on it’s axis very quickly.

A planet’s day is the time it takes the planet to spin or rotate once on it’s axis.

Jupiter has the shortest day of the eight planets.

The Galileo spacecraft arrived at Jupiter in 1995. While the main craft circled the planet, a small probe was dropped down into Jupiter’s atmosphere. With a parachute to slow it down, the probe studied the atmosphere and used radio signals to send information back to the Galileo craft.

Jupiter has gas in it’s atmosphere called methane. If the methane is struck by lightening, which is not uncommon on Jupiter, it will create a powder of carbon. As it falls, the carbon gets squeezed by the enormous pressure, and if you compress carbon enough it makes diamonds.

Scientists believe that it rains diamonds on Jupiter.

The first to record the sighting of Jupiter was in around the 7th or 8th century by the ancient Babylonians.