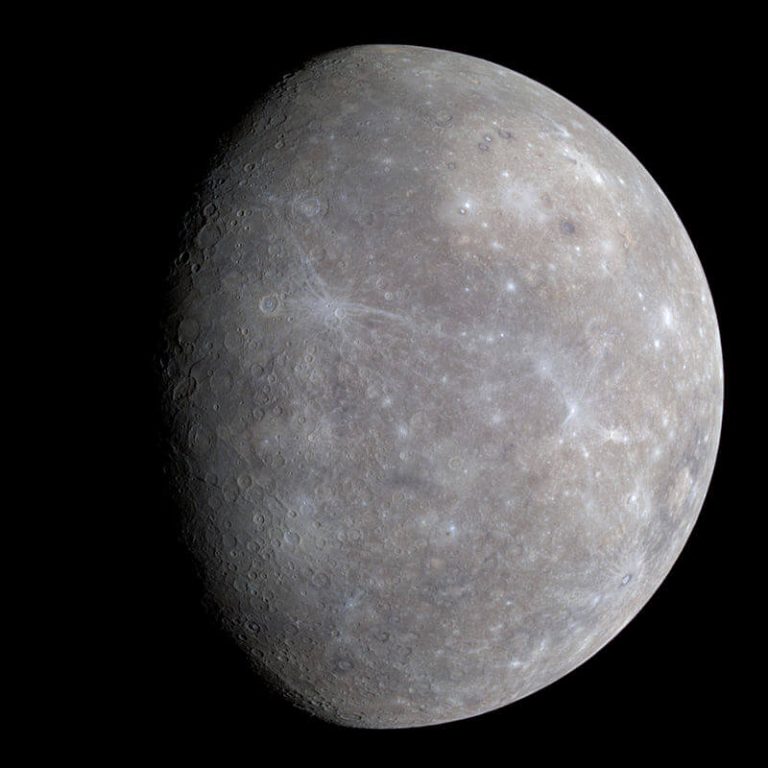 Mercury is the smallest planet in the Solar System.

Mercury is the closest planet to the Sun at a distance of 57 million km (35 million miles).

This is a list of planets in order of their distance from the Sun: Mercury, Venus, Earth, Mars, Jupiter, Saturn, Uranus and Neptune. Mercury is only slightly bigger than our moon, and like the moon, it has no atmosphere.

Mercury has no moon or rings.

Mercury does not experience any seasons.

The surface of Mercury is very similar to our moon.

Mercury is the most cratered planet in our Solar System.

Mercury has a dark gray rocky surface, which is covered in a thick layer of dust.

If you were to stand on Mercury’s surface, the Sun would appear about three times larger in the sky than it does from Earth.

Mercury revolves around the Sun very quickly, but rotates around its axis very slowly. This means one day on Mercury is longer than one year on Mercury. Confused, see below !!

Mercury takes just 88 Earth days to complete its journey around the Sun, which means it has the shortest year in the Solar System.

A day on Mercury lasts 176 Earth days, because it spins around  its axis very slowly. It takes a staggering 176 Earth days for the Sun to rise, set, and rise again to the same place.

Mercury is nicknamed “Swift Planet” because of it’s swiftness around the Sun.

If humans moved to Mercury, they would be four times their age in years, because you would have a birthday every 88 days.

Your weight on Mercury would be 38% of your weight on Earth, because Mercury weighs less than Earth, and therefore its gravity would pull less on your body.

Mercury has just 38% of the gravity on Earth.

Mercury orbits the Sun with a speed of about 29 miles, or 47 kilometers per second.

Mercury during the day is scorching hot, when temperatures are four or five times greater then the hottest places on Earth. However, owing to the fact it has a very thin atmosphere, it is not able to hold any heat from the Sun, so at night time Mercury plunges into a deep freeze.

Due to the extreme conditions on Mercury, it is highly unlikely life could survive on the planet.

Even though Mercury is closer to the Sun, Venus is actually hotter, because it has a thick atmosphere which traps the heat and keeps the planet nice and hot. This is called the greenhouse effect.

Mercury, Venus, Earth and Mars are known as the Inner Planets, because they are the planets nearest the Sun. These planets are all made up of the same kind of materials -rocks and metals, while they also have a solid outer surface called the crust.

Mercury is the second densest planet after Earth. This is due to the fact it is composed mainly of heavy metals and rock. (Dense means closely compacted).

As Mercury is the fastest planet as it moves around the Sun, it was named after the Roman messenger, God Mercury. Mercury was the god of travelers.

All planets names were given by the Romans who knew of seven bright objects in the sky: the Sun, the Moon, and the five brightest planets. They named them after their most important Gods.

Every seven years or so, Mercury can be seen from Earth passing across the face of the Sun.

The US Mariner 10 probe was the first spacecraft to visit Mercury. It set of in 1974 to take images of the planet. It discovered the planet is covered in large dents and hollows, called craters. They were created by rocky objects in space, called asteroids, that crashed into the planet over time.

Mercury is the planet we know least about. The problem is that Mercury is really difficult to get to because of the Sun’s gravity.

In 2004, NASA sent off the Messenger mission to Mercury in a enormously complicated path. Messenger went once around Earth, twice around Venus, and three times around Mercury, until it could settle into orbit. It took six and a half years to complete the journey.