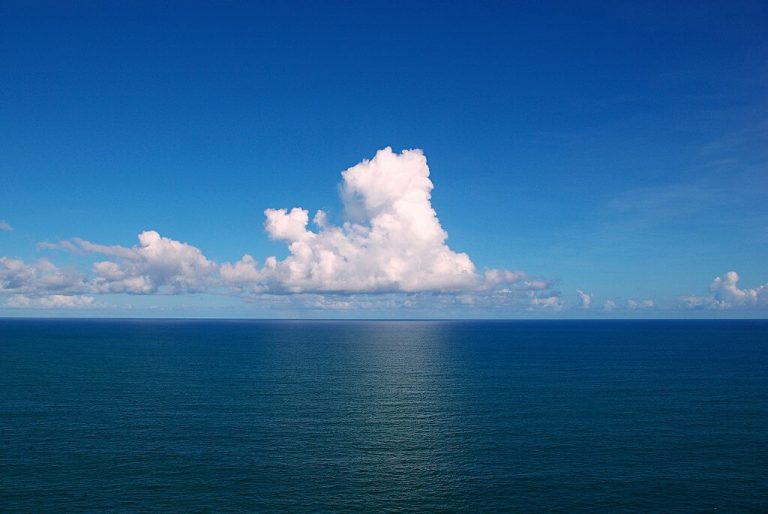 Around 71% of the Earth is covered in salt water. We call these oceans.

Earth is the only planet in the Solar System that has liquid oceans.

The oceans regulate the Earth’s climate.

Earth also has smaller bodies of water that are partly enclosed by land, called the seas. The three largest seas are, the Caribbean Sea, the Mediterranean Sea and the South China Sea.

The five oceans are all connected together, which in turn, are divided up by the world’s seven continents.

The average depth of the world’s oceans is 12,200 feet. The deepest point of the ocean is in the Mariana Trench, in the Pacific Ocean, with a depth of 36,198 feet.

WHAT IS THE LARGEST OCEAN ? The Pacific Ocean is the largest ocean in the world. It is divided into two parts, North and South Pacific. It covers around 30% of the Earth’s surface.

The Pacific Ocean has about 25,000 different islands.

The Atlantic Ocean is the second largest ocean, and is also separated into two parts, North and South Atlantic. It covers around 21% of the Earth’s surface.

The Indian Ocean is the third largest ocean, and it covers around 14% of the Earth’s surface.

The Southern Ocean covers around 6% of the Earth’s surface.

The smallest ocean is the Arctic Ocean. During winter, it is almost completely covered in ice. It covers approximately 4% of the Earth’s surface.

Tides in the oceans are caused by the Moon and Sun’s gravitational force on water, while the Earth spins.

Since the ocean depths were first investigated in the 19th century, scientists discovered that the deeper regions of the oceans are dotted with submarine volcanoes and long mountain ridges.

The world’s longest mountain range is actually under the ocean. It is called the Mid-Atlantic Ridge, and it stretches over 35,000 miles long. It is located along the floor of the Atlantic Ocean.

Mauna Kea, a dormant volcano on the island of Hawaii, rises 33,474 feet from its base. If it wasn’t below sea level, it would be the tallest mountain in the world. It is located in the Pacific Ocean.

The Bermuda Triangle is located in the Atlantic Ocean.

The heat of the Sun makes water evaporate from oceans, and rise into the air as water vapor, the vapor then cools to form clouds and rain.

The water near the ocean shore contain a lot of nutrients and drifting food, making it a rich habitat for marine animals.

Our oceans produces over half of the world’s oxygen.

The oceans provides us with many activities, from fishing to boating, to swimming and whale watching.

Our oceans provides us with more than just seafood, as ingredients from the sea can be found in many foods. Also, many ingredients are used in medicinal products, that helps us fight cancer, arthritis, Alzheimer’s disease and heart disease.

The oceans has many riches, and are mined for minerals such as salt, gravel, sand, copper, nickel and iron. They are also drilled for crude oil.

We have only explored 5% of the oceans around us.

The oceans are home to many different incredible creatures. There are so many new species that we are only starting to discover.

The Pacific Ocean is home to the worlds largest structure, which can be seen from the moon. Measuring around 2,600 km, the Great Barrier Reef is the world’s largest coral reef system composed of over 2,900 individual reefs and 900 islands. The reef is located in the Coral Sea, off the coast of Queensland, Australia.

We know more about outer space than to what is going on underneath the deep blue seas.

Unfortunately our beautiful oceans is being flooded with two types of pollution, which is a growing problem in today’s world. Chemicals and thrash pose a serious threat to marine life, such as the blue fin tuna and the whale, who are both in danger of going extinct.