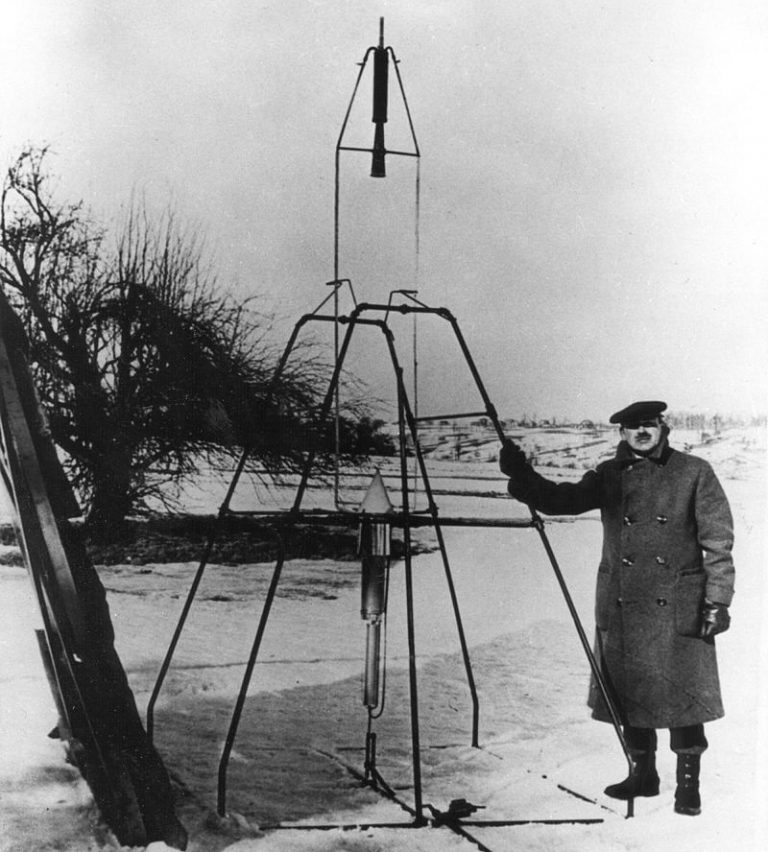 Rockets are the gadgets that produce the push, or force required to move an object forward.

A rocket is required to launch anything and anyone into space.

Rockets are used to launch satellites and space shuttles into space.

From Earth, we send astronauts into space on space rockets. Attached to some rockets are space shuttles, which break from the rocket in space. The astronauts are inside the orbiter, which is one of the main parts of the space shuttle. The orbiter then makes the final trip to it’s intended destination.

The space shuttle orbiter is the size of a small jet airliner.

The materials used in rockets and their cargo needs to be light, because a lighter rocket needs less fuel to launch it, which makes it less costly. The materials must also be strong to withstand the thrust at the launch.

The rocket must provide the power to lift itself off the ground, and in a short space of time, use its power to gain the speed required to carry it away from gravity’s pull, and into space.

At a rockets launch, it’s burning fuel produces hot gases that are forced through an exhaust nozzle at the bottom of the rocket. This provides the force to lift itself off the ground.

A typical rocket can travel at 22,000 miles per hour, and can produce more than a million pound of thrust.

A rocket cannot escape Earth’s gravity and make it into space unless it’s traveling at least 7 miles per second.

Although the space rocket was developed in the early 20th century, the earliest rockets were used by the Chinese about a thousand years ago. They were powered with gunpowder, and once lit, an explosive burst propelled the rocket forward. These small arrow rockets were used as weapons, and they resembled a firework.

In the 1880’s, rocket pioneer Konstantin Tsiolkovsky, a Soviet, started to work on the theory of rocket space flight. He worked out how fast a rocket needed to go, and how much fuel it would require. He proposed using liquid fuel.

The first ever liquid-fuel rocket was launched in 1926, by American Robert Goddard. The flight lasted two and a half seconds, and the rocket reached an altitude of 12.5 meters (41 feet).

The first mass produced long range rocket, developed in Germany, in the 1930’s, was called the V-2. It’s first launch was in 1942, and was used as a weapon against allied cities during World War II. Over 4000 V-2 rockets were fired at Britain alone in the last year of WW II.

After WW II, the V-2, and subsequent rockets for space travel, were developed by an American team, headed by Wernher Von Braun.

The first rocket to actually launch something into space was a R-7 ICBM rocket in 1957. It launched the first ever satellite, Sputnik into space.

On April 12, 1961, Soviet cosmonaut Yuri Gagarin became the first human to journey into outer space. His rocket called Vostok 1, was launched by the Soviet Union.

Rockets are also used to blast space shuttles into space.

Rockets use enormous parachutes to slow their descent when they come back down to Earth.

The New Horizons, launched on January 19, 2006, from Cape Canaveral, broke the speed record for the fastest rocket launch, at a speed of 36,000 miles per hour.

The Ariane rocket, is the launch vehicle of the European Space Agency (ESA). The agency consists of 22  European countries, which fund and develop satellites and experiments for space. The Ariane rocket is a family of five, with the sixth now in production.

One the most famous rockets was the massive Saturn 5, with the launch of Apollo 11, on July 16, 1969. Four days later on July 20th, Neil Armstrong and Buzz Aldrin landed on the surface of the Moon. The rest is history.

Typically, two rockets a week are launched into space from somewhere in the world.

Rockets have changes the world completely and have given us new eyes for the universe.

In 2002, NASA began investing in private space companies. SpaceX, owned by Elon Musk, was one of the first companies to receive money from NASA. Since then, SpaceX has developed a reusable rocket and launch system to significantly reduce the cost of space flight.

A SpaceX Crew Dragon carrying four astronauts docked with the International Space Station on the 15th November, 2020. The Crew Dragon capsule became the first certified by NASA since the Space Shuttle nearly 40 years ago. It is the first of what NASA hopes will be many routine missions, ending U.S reliance on Russian rockets.

On Sunday, January 24th, 2021, SpaceX successfully launched the Transporter-1 mission. The company’s Falcon 9 rocket lifted off from Cape Canaveral in Florida, with 143 commercial satellites on board, breaking the record for the most number of satellites ever flown on a single rocket.

On Sunday, July 11th, 2021, British billionaire Sir Richard Branson reached the edge of space on his rocket plane. The VSS Unity spaceplane was launched in mid-air after dropping from the belly of its mothership at an altitude of about 9.4 miles (15km) before its rocket fires the craft and its crew into sub-orbit space at least 55 miles (88km) above the Earth. Richard Branson’s company Virgin Galactic’s main aim is to be operating multiple space tourism flights a year, and already has more than 600 customers for the $250,000 seats-including Justin Bieber and Leonardo DiCaprio.

Blue Origin made history on July 20th, 2021, with the launch of its New Shepard rocket on its first crewed spaceflight. The launch carried the company’s billionaire founder Jeff Bezos (of Amazon fame), his brother Mark, Mercury 13 aviation pioneer Wally Funk and 18-year old student Oliver Daemen, the first paying passenger on New Shepard. Blue Origin was founded with the vision of enabling a future where millions of people are living and working in space to benefit Earth.