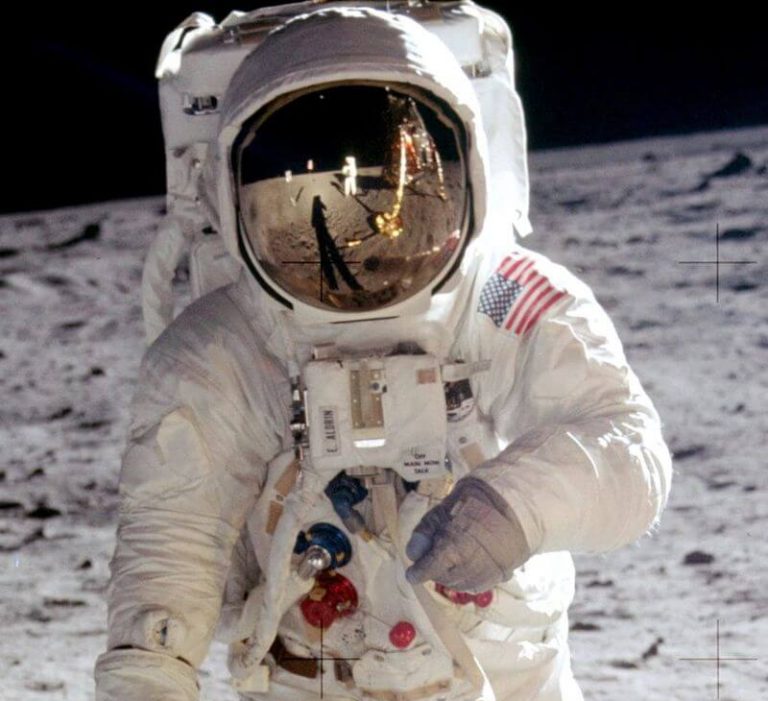 A spacesuits main job is to protect an astronaut.

A spacesuit must allow the astronaut to move around easily.

These two requirements has not changed since the first astronaut flew many years ago.

However, over time spacesuits design has changed. New materials and techniques combine to produce a comfortable and efficient suit for today’s working astronauts.

Spacesuits give astronauts oxygen to breath while they are working in space. 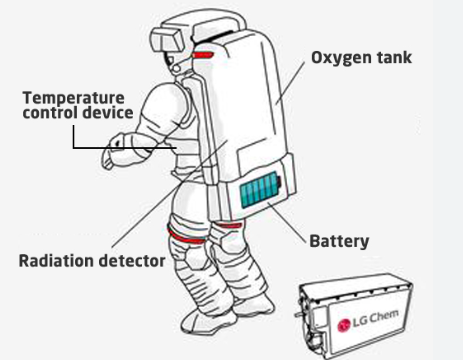 The first suits designed for astronauts were for NASA’S Mercury program between 1958-1963. This was the first time astronauts flew into space. As they never left their craft, the suits they were wearing during the launch stayed on them while they were eating, sleeping, going to the toilet, and also for the return journey. Over-time, astronaut fashion would change.

The first spacesuit worn by a human in space was Soviet cosmonaut Yuri Gagarin in 1961.

The next suits designed were for the Apollo program between 1960-1972, which coincided with the landing of the first humans on the moon in 1969. These spacesuits had boots made to walk on rocky surfaces. They also provided the astronauts with a life support system, plus added protection against extreme temperatures and space dust, whilst out spacewalking.

In 1988, astronauts wore orange spacesuits called “launch and entry suits” (LES) during the launch and landing of the space shuttle. Known as the “pumpkin suit,” these were phased out by 1995, and replaced by the ACES suit. 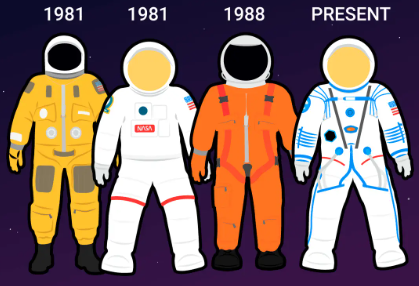 The launch and entry suits (LES) were replaced by the Advanced Crew Escape Suit (ACES), during the period of 1994-1995. Similar in color to the LES suit, the ACES suit is worn while the space shuttle is ascending or entering into space. These are designed to help astronauts escape quickly if they encounter any problems during take-off or landing.

ACES are a peculiar shade of orange known as “International Orange.” They are highly visible against any type of terrain, especially in water.

Today’s astronauts wear different suits for launch, working outside, and for returning. Inside the space station they can wear casual clothes, just like what they wear back on Earth.

A Maximum Absorbency Garment is a space diaper astronauts wear when they are going to experience long delays while they are sitting in the space shuttle, strapped to their seats.

The spacesuits are custom tailored to fit each astronaut.

Astronauts put on their spacesuits hours before going on a spacewalk, during which time, they breathe in pure oxygen in preparation for their activity.

Spacesuits for working in space are made in white because it reflects heat in space, just as it does on Earth.

There is no difference between a male and female spacesuit.

The weight of a space shuttle spacesuit, which includes the life support backpack weighs approximately 310 pounds.

Due to the large numbers of astronauts with various different sizes, the shuttle spacesuit was designed to be made of many interchangeable parts to accommodate them.

A NASA shuttle spacesuit with a life support backpack costs upwards to $12,000,000.

Astronauts gloves and boots have insulation and heating elements applied to them, to protect them from the extreme cold temperatures.

Astronauts helmets are made of polycarbonate, which you would find in bulletproof glass and exterior motor parts. They also consist of a thin layer of gold on the helmets visor to protect them from solar radiation.

Underneath an astronauts helmet, he wears a cap called a snoopy. This is a communication cap that contains two earphones and two microphones. They have two of each just in case there is a malfunction of a single unit.