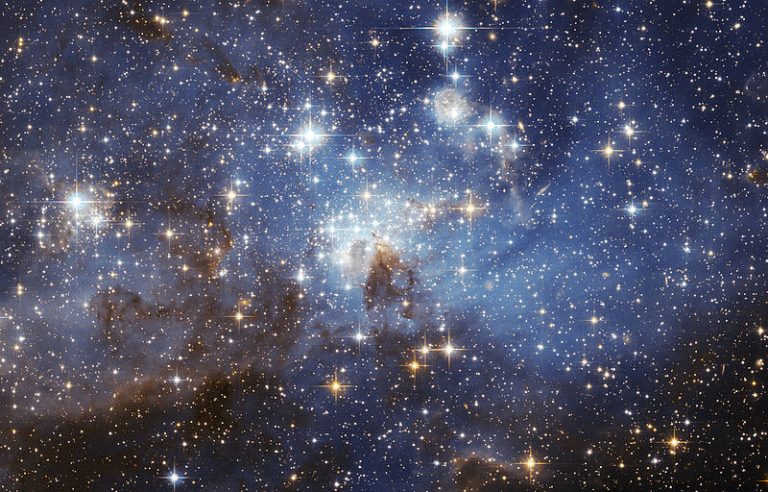 Stars are the most common objects in the night sky. They are the true giants of space. Stars are gigantic balls of burning gas, found in huge groups called galaxies. There are billions of them, including our own Sun.

HOW ARE STARS FORMED ?

Stars are formed in swirling clouds called “nebulae”, which is made up of gas and dust. When they collapse under their own gravity they bind together to form spinning, gigantic balls. These young stars quickly heat up and shine, making each nebula glow in beautiful colors.

The process of star formation can take around a million years from the time the initial gas cloud starts to collapse until the star is created and shines like the Sun.

Stars are born and die over millions or even billions of years.

A “nebulae” is an huge cloud of dust and gas occupying the space between stars and acting as a nursery for new stars.

WHAT ARE THE CONSTELLATIONS ?

Constellations are groups of stars visible from Earth. They have been studied for centuries and form patterns in the night sky. The pattern they form may take the shape of animals, mythological creatures, objects or people. Different cultures have different stories about the constellations.

The International Astronomical Union (IAU) recognizes 88 constellations covering the entire northern and southern sky. Not all constellations are visible from any one point on Earth.

Ursa Minor, also know as the Little Dipper, is the easiest constellation to find in the night sky. It’s shaped like a bowl with a handle. Along the handle, you’ll find the brightest star, the North Star.

Orion, named after a hunter from Greek Mythology, is one of the most visible constellations. Due to its location it can be seen throughout the world. It also contains two of the ten brightest stars in the sky, Rigel and Betelgeuse.

The Milky Way is the galaxy our Solar System resides within, and it contains an estimated 100-400 billion stars.

Inside galaxies, there are two type of star clusters. Firstly, you have “open clusters,” which is comprised of bright young stars, which have just formed and are relatively close together in space. Then there is “global clusters”, which are much larger than open clusters, and tend to be found above and below the central bulge of a galaxy.

There are about 150 known global clusters in our galaxy, each containing up to a million stars.

Stars die when they eventually run out of fuel. When small and middle aged stars, such as our Sun, has burned all of its hydrogen fuel, it expands to become a red giant, before shredding their outer layers of gas, and is pushed away into space.

The biggest stars are called supergiants and these live for the shortest time. When these supergiants run out of fuel, they break up in the middle and with a enormous dazzling-bright explosion, it sends their outside layers into space. This is called a “supernova.”

A supernova can be seen from Earth, although the last one seen by the naked eye was in 1604.

Everything you see, it’s atoms were made in stars. The stars that exploded in a supernova over 4.5 billion years ago, sent it’s atoms into space, and they ended up here.

An atom is the basic unit of an element. It can also mean a very small piece of anything at all. About 99% of your body is made up of atoms of carbon, nitrogen, hydrogen and oxygen.

Astronomers and scientists have spent years solving the mystery of how stars live and die in space.

The leftovers after a supergiant star ends it’s life in a supernova tends to form into something from its bits and pieces. This is called a neutron star. But sometimes gravity pulls so hard on the leftovers, that they all squash together and shrink into a single point in space . This is known as a “black hole.”

The Sun is one of at least 100 billion stars in our galaxy, the Milky Way. And there are billions of galaxies in the Universe.

Most stars are bigger than Earth. But the stars are very far away from our Solar System, so they appear to be very tiny to us.

Our Sun is actually smaller than almost every star you see in the night sky. It appears bigger because it’s a lot closer to us.

The largest known star in the universe is “UY Scuti,” a hypergiant with a radius around 1,700 times larger than the Sun.

A red star has the coolest temperature, although they are still about 5,000° Fahrenheit, while the hottest stars are blue or white, and these can be as hot as 200,000,000° Fahrenheit at their core.

Stars do not twinkle. They only appear to twinkle due to turbulence in the Earth’s atmosphere.

The most common type of star is a red dwarf.

The average age of a star is between 1 and 10 billion years old.

It takes millions of years for a stars light to reach our eyes, meaning you are seeing stars from a long time ago. Looking at the night sky is like looking back in time 100,000 years.