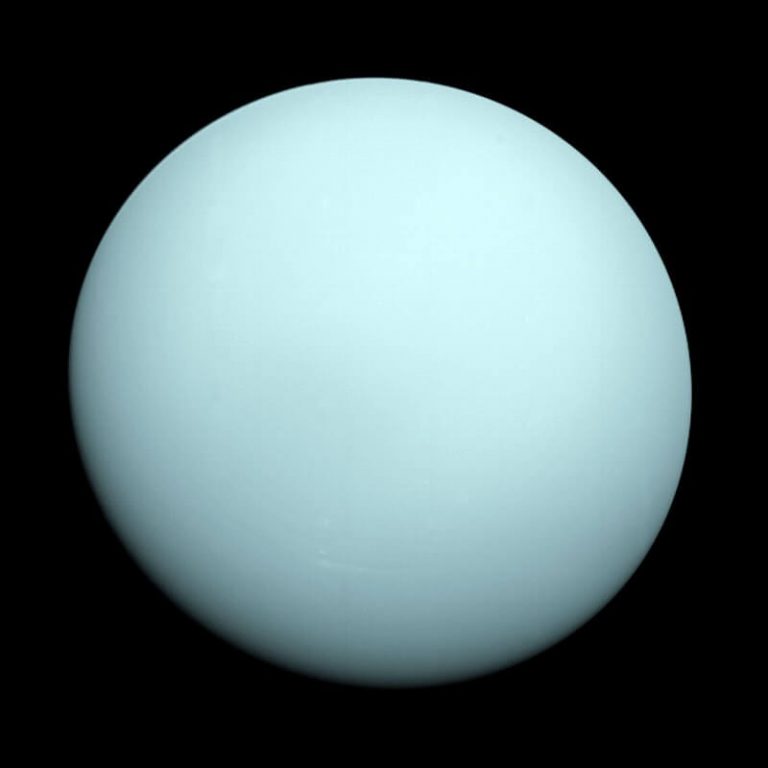 Uranus is a cold and windy planet. Uniquely, it spins on it’s side as it travels, a bit like a ball rolling across the floor.

Uranus has a thick atmosphere made of hydrogen, helium and methane.

A planet’s day is the time it takes the planet to spin or rotate once on it’s axis.

A planet’s year is the time it takes to complete a single orbit around the Sun.

Uranus takes 84 Earth years to complete one journey around the Sun.

Uranus, Neptune, Jupiter and Saturn are considered the gas giants of our Solar System. A gas giant is a giant planet composed mainly of hydrogen and helium.

Uranus and Neptune are quite similar, but their looks hide many differences.

The secret behind what gives ice planets Neptune and Uranus their distinctive blue hues has been discovered by Oxford University scientists. Neptune is a deeper blue than Uranus because it has a thinner layer of haze. The haze of these ice giants forms an atmospheric curtain which gives them their distinctive blue color.

Uranus is named after the Roman God of the sky.

Astronomers believe at some point in the distant past, an object the size of Earth, somehow crashed into Uranus, and tilted it off center, as now it orbits the Sun on it’s side.

Uranus spins from east to west, instead of west to east, like every other planet, except Venus.

Uranus, like Saturn and Jupiter has rings. It’s made of gas too, mostly helium and hydrogen, but also some methane, which makes the planet look blue.

Uranus has at least 13 narrow rings. In the rings, there are rocks which are the darkest in the Solar System, a bit like coal.

Miranda, one of Uranus’s moons, has a surface full of icy cliffs and craters, which scientists believe is from large asteroids striking the surface.

As Uranus orbits around the Sun on it’s side, one half of the planet receives light from the Sun all the time, whereas the other side stays in complete darkness.

Astronomers in the present day do not even have to look into the sky themselves, because their telescope’s have special computer’s that can collect the information for them.

Voyager 1, launched in 1977, was one of two space probes sent up to study the Giant Solar System. It passed Uranus in 1986, and is now passing through the outer reaches of the Solar System.

Uranus has only been visited once by a spacecraft and that was more than 30 years ago. Uranus does not have a surface for a spacecraft to land on, while it’s atmosphere would destroy it’s metal.

It has the coldest temperature of any of the planets.

Uranus is often referred to as an Ice Giant planet.

Uranus is about four times bigger than Earth.

The order of the planets in the Solar System, starting nearest the Sun and working outward is: Mercury, Venus, Earth, Mars, Jupiter, Saturn, Uranus and Neptune. Uranus is the seventh planet from the Sun.

Pluto was once considered the 9th planet of the Solar System. In 2006, it was downgraded from a planet to a dwarf planet by the International Astronomical Union (IAU), because it could not meet the three criteria the IAU uses to define a full sized planet.

Uranus cannot support life because there is no oxygen.

Uranus is the third largest planet in the Solar System.

It would take almost nine and a half years to travel to Uranus.

Gravity is the invisible pulling force that works in space.