INTERESTING FACTS ABOUT ANIMALS IN SPACE !!!

Before the first human flight, animals were sent into space to test the conditions. Nowadays, insects, birds and other species, accompany astronauts to be used for scientific research.

The first astronauts to break through the Earth’s atmosphere were actually dogs and monkeys, strapped into rockets and blasted away, often never to return.

As early as 1947, the first animals launched into space were fruit flies on the Nazi V-2 rocket. The flies reached an altitude of 68 miles and were recovered alive by parachute. The purpose of the experiment was to explore the effects of radiation exposure at high altitudes.

In June of 1948, Albert became the first monkey to be sent into space, when the USA launched the V-2 rocket. He died of suffocation during the flight, possibly even before the capsule left the ground. The capsule itself only made it to a unsuccessful height of 39 miles (63 km).

The following year in June of 1949, Albert was followed by Albert II, who survived the flight after reaching an altitude of 83 miles (134 km), unfortunately he died on impact after a parachute failure. Albert II was known as the first primate in space. Two other monkeys, Albert III and IV also died when their rockets failed.

About two thirds of all monkeys launched in 1940’s and 1950’s died on missions, or soon after landing.

The first mouse was launched into space on 31st August, 1950, on a USA V-2 rocket, but died when the rocket disintegrated, due to parachute failure.

The Soviet Union launched the R-1 flight on 31st August, 1951, carrying two dogs, TAsygan and Deszik into space. Although they did not go into orbit, they were the first living higher organisms successfully recovered from a spacecraft. The two space dogs survived the flight.

The Soviet Union always used stray dogs because they were thought to be capable of handling extreme cold climates.

On November 3rd, 1957, the Soviet Sputnik 2 spacecraft carried the first animal into orbit, a dog called Laika, who unfortunately died during the flight. One of the scientists behind the mission reported that Laika had died from overheating.

On the 28th of May, 1959, two monkeys, Baker and Able became the first monkeys to survive a spaceflight aboard the USA Jupiter IRBM AM-18. The monkeys reached a altitude of 360 miles and a distance of 1,700 miles. They survived the flight in good condition.

On Sept 19th, 1959, a USA launch carried 2 frogs along with 12 mice, but the rocket was destroyed during launch.

The first spacecraft to carry animals into orbit and return them alive was the launch of the Soviet Union Sputnik 5, on the 19th of August, 1960. It carried the dogs Belka and Strelka, along with a grey rabbit, 40 mice, 2 rats, 15 flasks of fruit flies and plants.

On January 31st, 1961, Ham became the first chimpanzee in space. He was launched in a Mercury capsule, aboard a Redstone rocket, strapped in a container called a couch. His flight lasted approximately 16 and a half minutes. He traveled at a speed of 5800 mph, to a height of 157 miles above Earth. On his return, he was examined and found to be in excellent health. Ham paved the way for Alan Shepard to become the first American human in space three months later.

The French launched the first cat into space on October 18th, 1963, called Felicette. She is the only cat to have survived a spaceflight.

The longest space flight by dogs was in late February, 1966, when two Soviet space dogs were launched on board the Cosmos 110 spacecraft. They spent 22 days in orbit before landing on the 16th of March. The record breaking duration was not surpassed by humans until Soyuz in 1971. The dogs names were Veterok and Ugolyok.

The United States launched a series of bio-satellites between 1966/67, carrying fruit flies, wasps, flour beetles, frogs eggs, along with bacteria, amoebae, plants and fungi. They were to be used for scientific research. The third and final biosatellite carried a pig-tailed monkey. It died hours after landing from a heart attack

The second spacecraft to circle the moon was the Soviet Zond 5 in 1968. The unmanned spacecraft carried the first terrestrial organisms to the moon, including two tortoises, mealworms, wine flies and plants. This was the first time to return moon visitors safely back to Earth.

When Neil Armstrong first walked on the moon in 1969, animals took a back seat and no longer made the headlines. Animals had done their jobs testing the conditions for humans. But at least today when animals are launched into space, they are not alone, as they have astronauts to accompany them in much better conditions. We have a lot to be thankful of our little friends. 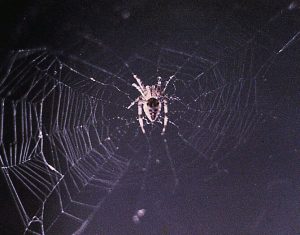 Even after humans landed on the moon, spacecrafts continue to carry biological payloads into space. Such species as rabbits, turtles insects, spiders, fish, jellyfish, amoeba and algae have experienced outer space.

In 1973, two female garden spiders spun webs aboard the NASA Space Station Skylab for 59 days. They were giving the names Arabella and Anita.