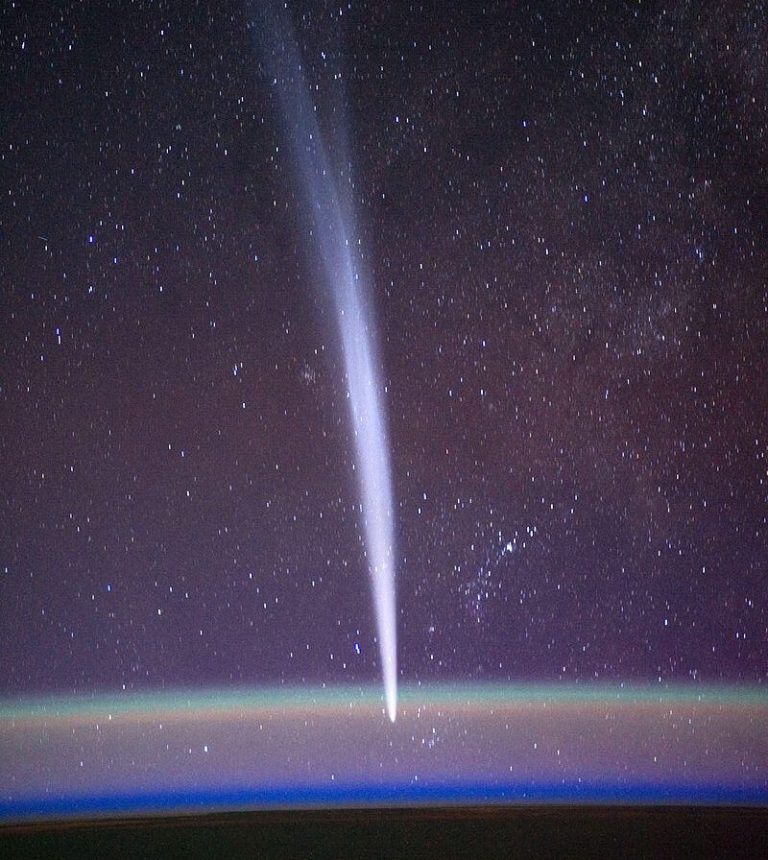 They travel around the Sun in a enormous, ball shaped place, called the Oort Cloud, with billions and billions of other comets. This stretches all the way around our solar system, way beyond Pluto.

When a comet leaves the Oort cloud or the Kuiper Belt and gets closer to the Sun, it starts spewing dust and gas, gets brighter, increases in size and then a forms a head and tails.

As a comet gets closer to the Sun, the ice on the surface of the nucleus melts and starts spewing dust and gas out, forming a cloud around it, called a coma. The coma could be larger than a planet.

As the comet gets closer again to the Sun, the energy from the Sun hits the dust particles in the coma and pushes it away, creating a spectacular tail. Some tails can reach 100 million miles long.

Similar to the dust tail, except this tail is created by electrically charged molecules of gas, rather than the energy from the Sun. The dust tail and gas tail have different weights, which makes them split into two eye-catching tails.

Comets have such vast space in the Oort Cloud and the Kuiper Belt, that they get no closer to each other, than we on Earth do to the Sun.

Comets have been given a nickname of “dirty snowballs” or “cosmic snowballs.”

The head that appears on a comet as it gets nearer the Sun is called a “coma.”

On Earth, we can only see comets when they leave the Oort Cloud and the Kuiper Belt.

The first person to realize that comets orbit the Sun was Edmond Halley in 1664, while looking through his dads telescope.

The most famous and talked about comet is Halley’s comet, named after the first person to witness it, Edmond Halley. He developed an obsession with star gazing as a young man, and ended up studying the sky for most of his entire life.

In 1705, Edmond Halley realized that the comet that appeared in the night sky, in 1531, 1607, and 1682, was actually the same comet that orbited the Earth every 76 years. He predicted it would appear again in 1758, but unfortunately he did not live long enough to see its return, as he died in 1742. His discovery inspired others to name the comet after him.

Halley’s comet is still appearing in the night sky every 76 years. The last time it traveled by Earth was in 1986, while its next visit is due in 2061.

In 1950, an astronomer named Jan Oort, predicted that there was an enormous ball shaped cloud of comets surrounding the Sun, reaching out further than the Kuiper Belt. He was proved right, and in his honor it was named the Oort Cloud.

Halley’s comet is the only known comet that we can see from Earth with the naked eye.

On March 2nd, 2004, the European Space Agency launched the space probe  Rosetta, and 10 years later it went on to orbit around a comet, named the 67p/Churyumov-Gerasimenko. It dropped a lander named Philae on the comet, which was the first human made craft to ever land on a comet.

Unfortunately the way it landed on the surface, the solar panels couldn’t get any power, so poor Philae is still asleep on the comet. Rosetta’s final act was to photograph itself coming into land on the comet.

A comet called the Shoemaker Levy 9 crashed into Jupiter in 1994, causing a week long fireworks show.