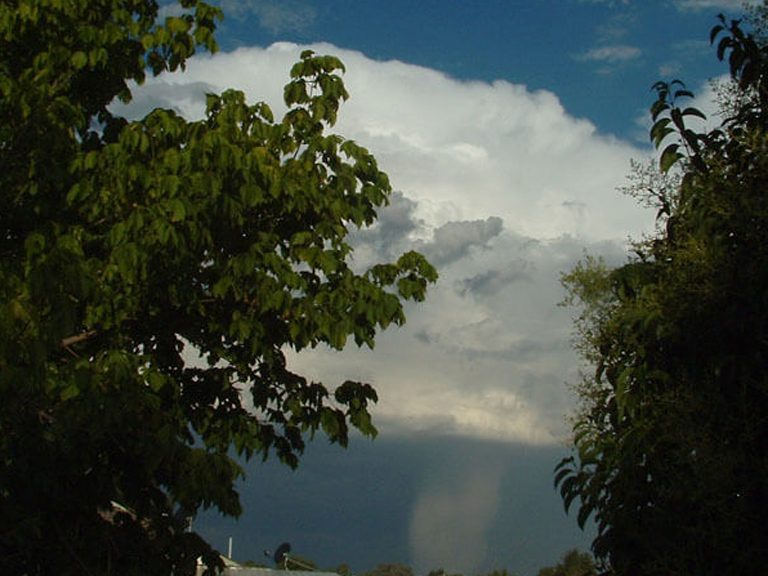 Go to the press and grab a big mug, now go to the fridge and fill the mug with ice-cubes from the freezer. All done, good. Now go outside into the garden and throw the ice-cubes high into the air and stand underneath them as they come falling back down to Earth. Only joking, don’t do it, as you might hurt yourself.

This is just to show you exactly what hailstones are, rock solid balls of ice falling out of the sky on to your head, that can really hurt, even when they are normal pea-sized hailstones. But they can be much bigger. So if you’re outdoors and suddenly hailstones starts to fall, run for cover.

HOW DOES HAIL FORM ?

Eventually the hailstones become to heavy for the updraft to support it, so they fall to the ground in the form of hailstones. Hail is another form of precipitation, just like rain, sleet, and snow.

Hail is usually pea-sized to marble-sized, however big thunderstorms can produce big hail. The largest hailstones are called “aggregate” hailstones, which are made up of lots of smaller hailstones stuck together.

The largest aggregate hailstone on record fell during a severe thunderstorm that struck Vivian, South Dakota, in the United States on the 12th of July, 2010. With a diameter of 8 inches and weighing in at an amazing 1.9375 pounds. It was as big as a melon !!!.

A lot of people over the years have been killed by hail. On one occasion in Bangladesh, a giant storm of “grapefruit-sized” hailstones killed almost a hundred people in 1986. A hailstorm can dent cars, smash windows, damage roofs and cut of power lines.

If you cut a large hailstone in half you will actually see the layers of ice in it, something similar to the growth rings in a slice of tree trunk.

Normally the bigger and heavier the hailstone is, the higher in the sky it falls from.

Hail forms at the top of cumulonimbus clouds (thunderclouds).

Hailstorms are normally heavy and sudden and last only a couple of minutes. In this time, they move across the land leaving a trail of hail, called a hail swath.

In heavy hail there is so much water in them, that when they melt it could cause a flash flood.

Kericho in Kenya, holds the record for the most hail. It was known to have had 132 days of hail in one year.

Hailstones move around rapidly inside a thunderstorm like bouncy balls until they are heavy enough to fall.

It is believed that back in the 1700’s people fired cannon balls into the clouds to try to prevent hail.

It can hail anywhere in the world, but countries like China, India, Russia and Australia see pretty heavy hailstorms, causing damage worth millions of dollars.

Heavy hailstorms are also found in the United States, particularly in the states of Wyoming, Colorado, and Nebraska.

The Great Plains region of the United States and Canada is called “Hail Alley.”