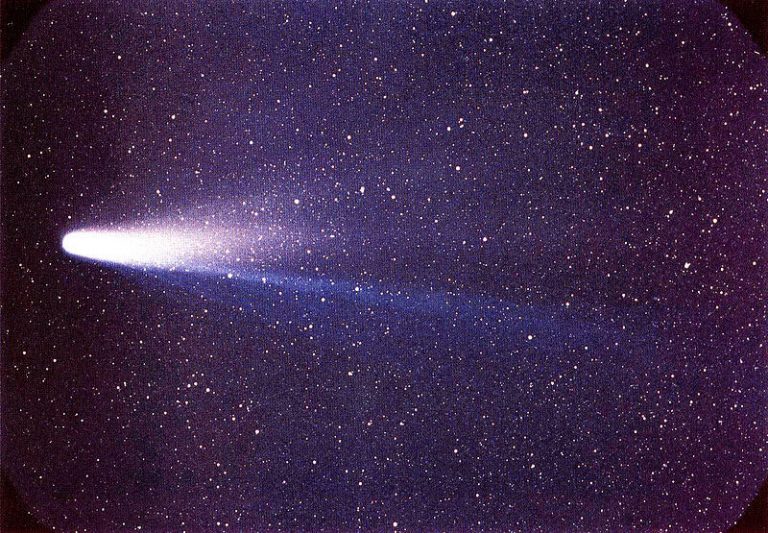 The first person to realize that comets orbit the Sun was Edmond Halley in 1664, looking through his dads telescope.

The most famous is Halley’s comet, named after the first person to witness it, Edmond Halley, who had developed an obsession with star gazing as a young man. He studied the sky for most of his entire life.

In 1705, Edmond Halley realized that the comet that appeared in the night sky in the years 1531, 1607 and 1682, was actually the same comet that orbited the Earth every 76 years. He predicted it would appear again in 1758, but unfortunately he did not live long enough to see its return, as he died in 1742. His discovery inspired others to name the comet after him.

Halley’s comet is still appearing in the night sky every 76 years. The last time it traveled by Earth was in 1986, and its next visit is due in 2061.

Halley’s comet is the only visible comet that may occur twice in a human lifetime.

Halley’s comet orbits around the Sun, in between the orbits of planets Mercury and Venus.

When Halley’s comet visits us again in 2061, it will be on the same side of the Sun as Earth, so it will be better positioned for observation than previous visits.

At its closest point, Halley’s comet is 88 million kilometers from the Sun.

The dimensions of Halley’s comet are 10 x 5 x 5 miles. With its size and speed, if it was to hit Earth, it would be a global catastrophe.

Halley’s comet is classified as a short period comet.

A portion of Halley’s comet has a glowing appearance that is known as a coma, which is only visible when it is close enough to the Sun.

As a comet gets closer to the Sun, the ice on the surface of the nucleus melts and starts spewing dust and gases out, forming a massive cloud around it, called a coma. The coma could be larger than a planet.

As the comet gets even closer to the Sun, the energy from the Sun hits the dust particles in the coma and pushes it away, creating s spectacular tail. Some tails can reach 100 million miles long.

Similar to the dust tail, except this tail is created by electrically charged molecules, rather than the energy from the Sun. The dust tail and the gas tail have different weights, which makes them split into two eye-catching tails.

When Halley’s comet last visited in 1986, it was visited by several space probes. The probe Giotto managed the closest approach to the comet. From this, it is now known that its surface is largely composed of dusty materials, while only a small portion of it is icy.

Halley’s comet is estimated to be 4.5 billion years old.

Many people say Halley’s comet looks like a flying dirty snowball with a long tail.

It is known that when Halley’s comet appeared in the sky in 1835, Mark Twain was born, and he died when the same occurrence happened in 1910.