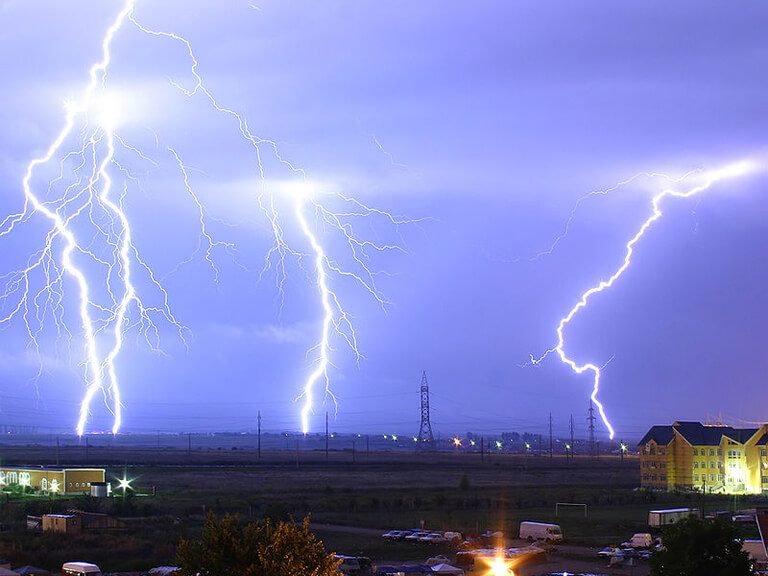 Lightning is a very forceful electric current that takes place in the atmosphere during a thunderstorm. Most lightning occurs within the clouds, however, it can also extend from clouds to the ground, and on many occasions, it has struck people.

Thunder is caused by lightning, and you can’t have a thunderstorm without thunder.

Lightning begins in cumulonimbus clouds (thunderclouds). When the thunderclouds reach high in to the atmosphere, it is so cold that the water droplets in the clouds turn into small hailstones and ice crystals. As these rub and crash against each other, static electricity starts to build up.

Not so long after, the whole cloud fills up with electrical charges, and as the storm moves over the ground, the strong negative charge in the cloud attracts positive charges in the ground, and with this, the electrical energy in the thundercloud is released in the form of huge sparks, called lightning.

There are three common types of lightning: cloud to cloud, cloud to ground and cloud to air.

Lightning that jumps from a cloud to another cloud is called sheet lightning.

Sheet lightning is hard to see because it is hidden by the cloud that it lights up.

Lightning that jumps between a cloud and the ground is called forked lightning.

Forked lightning is very visible, as you can see in the image above.

This refers to a bolt of lightning that jumps from a cloud into clear air, and stops instantly in the air surrounding the storm.

All forms of lightning that don’t reach the ground, can basically be considered cloud-to-air lightning.

As lightning bolts takes the shortest path it can between the cloud and the ground, it normally strikes tall obstacles. To counter this, most high rise buildings these day have a metal lightning rod or conductor attached to their rooftops.

Lightning is a very bright flash of electricity that occurs in a thunderstorm.

A lightning bolt is four times hotter than the Sun.

Lightning can be as hot as approximately 54,000 degrees Fahrenheit.

Lightning strikes about 100 times per second on Earth. Global Warming is increasing this rate, due to more warm air producing more thunderstorms.

Lightning bolts travels at speeds of up to 60,000 miles per second, while the average length of a single lightning bolt is 2-3 miles.

A “Bolt from the Blue” is a cloud to ground flash of lightning. It generally comes out of the rear of a thunderstorm cloud, where it can travel horizontally for miles before striking the ground.

Thunder is the sound caused by lightning. When lightning strikes, it creates a hole in the air called a channel. After the lightning has stopped, the hole collapses, creating the sound wave of thunder.

The reason we see lightning before we hear the thunder is because light travels faster than sound.

Lightning is most likely to hit tall objects, including buildings, trees, mountains and people.

The empire state building in New York city is struck by lightning about 25 times every year.

If you hear a thunderstorm in the distance, count the seconds between the first flash of lightning and the first clap of thunder, then divide it by 5, and this will tell you how many miles away the thunderstorm is.

The odds of someone being hit by lightning in their lifetime are one in 13,000.

If there is lightning when a volcano erupts, it’s called a dirty thunderstorm.

Lightning can strike up to 24 km (15 miles) away from the storm.

Fulminology is the study of lightning.

Astraphobia is the fear of thunder and lightning.

If you are outside during a thunder and lightning storm, stay away from trees, electricity poles, water, telephones and anything metal at all, as they all conduct electricity and can be very dangerous.

A lightning bolt that stretched for 768 kilometers (477.2 miles) across the southern United States in 2020 is the new world record holder for the longest single flash, according to the World Meteorological Organization (WMO). The mega flash extended across the states of Texas, Louisiana and Mississippi on April 29, 2020, beating the previous record set on October 31, 2018, in Brazil of 709km (440.6 miles).