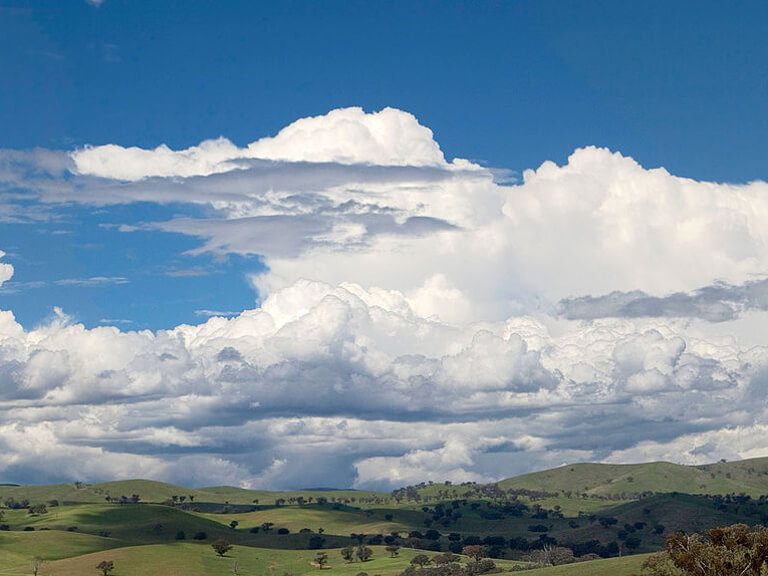 Clouds look fluffy and light, but inside them is a mass of tiny water droplets or ice crystals, that could weigh more than an airplane.

Clouds are an important part of Earth’s weather and climate. Rain, sleet, or snow falling from clouds is called precipitation.

Clouds are white because they reflect light from the Sun, in contrast, grey clouds are full of water, so they don’t.

HOW DO CLOUDS FORM ?

Clouds are formed when the heat of the Sun pulls water vapor up from the ground into the sky. When the warm air rises, it cools, then the water vapor turns into tiny droplets of water or ice. As more and more air cools down, more droplets form, and this will eventually turn into a cloud.

Clouds normally form within the troposphere, or the layer of atmosphere closest to Earth.

Always remember, clouds only form when warm air cools, and it is this warm air that helps to keep the clouds floating. There are many different types of clouds, the most common ones we see are called stratus, cumulus and cirrus. 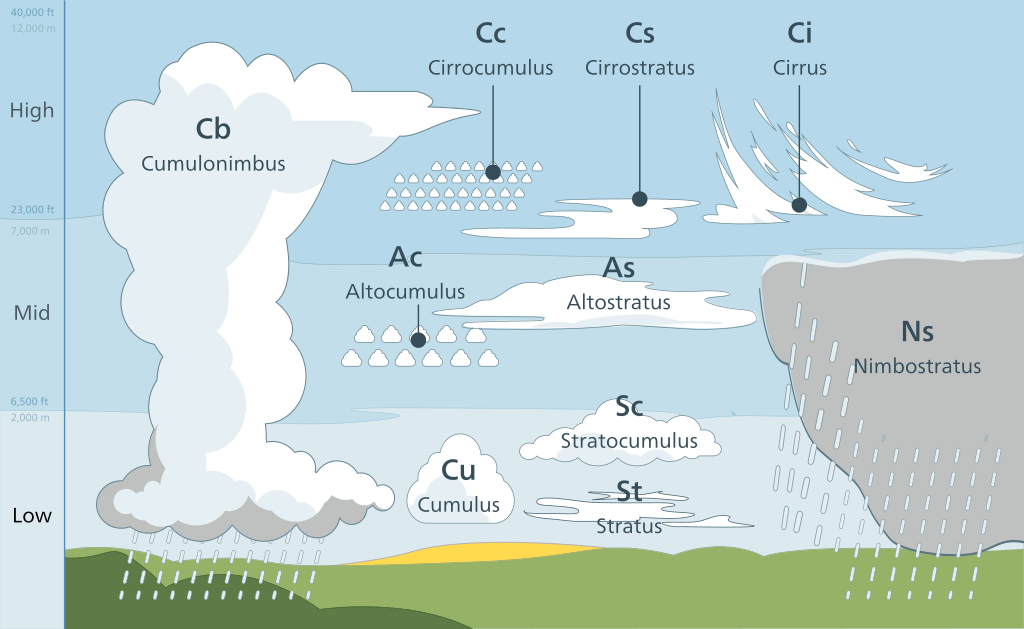 Stratus clouds are composed of thin layers of clouds covering a large area of the sky. These clouds are very common all over the world, and would only produce light showers of rain, or even light snow if temperatures fall below freezing.

Cumulus clouds are “puffy” or “cotton-like” in appearance, and can be white or grey in color. They are found on calm clear days and would indicate fair weather, but can grow into thunderstorm clouds giving the right conditions.

Cirrus are the highest level clouds. They are composed of ice, as the higher you go up the colder the conditions. They are usually white and predict fair to pleasant weather. They normally indicate that a change in the weather will occur in the next 24 hours.

OTHER TYPES OF CLOUDS !!!

A cloud that forms on the ground is called Fog. Most clouds form in the troposphere, which is the lowest part of the Earth’s atmosphere. Some form as high as the stratosphere or mesosphere.

Cumulonimbus clouds are large, tall clouds that are associated with extreme weather, such as torrential rain, hail storms, lightning or even tornadoes. The cumulonimbus cloud is more commonly known as the thundercloud.

Cirrostratus clouds are very thin, transparent, high-level clouds, which cover large regions of the sky. White in color and most commonly seen in winter, they normally indicate rain or snow will arrive within 24 hours.

Cirrocumulus clouds form very high in the air. Usually white in color, these small rounded clouds are mostly seen in the winter and indicate fair, but cold weather. Although they might indicate an approaching hurricane, if seen in tropical regions.

Altocumulus clouds are mid level clouds, white or gray in color. They normally form in many small rows of fuzzy ripples. They are mostly found in settled weather.

Altostratus clouds are middle altitude clouds, gray to bluish-green in color. They usually cover the whole sky and indicate a warm front is approaching.

Stratocumulus clouds are low-level clouds, puffy and gray in color. Most often they produce no precipitation, but if they do, it’s usually only light rain or snow.

Some of the clouds you see in the sky could be from airplanes. These are called contrails.

Clouds normally form within the troposphere, or the layer of atmosphere closest to Earth.

The troposphere starts at the Earth’s surface and extends 8-15 km (5-9 miles) high.

The atmosphere is comprised of layers based on temperature.

Most airplanes fly in the stratosphere.

The mesosphere is vital for the Earth’s protection. This layer burns up most meteors and asteroids before they are able to reach the Earth’s surface.

The thermosphere absorbs the Sun’s radiation, making it very warm. Here you will also find the International Space Station as it orbits Earth. It is also home to many low Earth orbit satellites.

The ionosphere is where Earth’s atmosphere meets space.

The exosphere is the outermost region of a planet’s atmosphere. As it fades into outer space, there is no boundary of this layer.

When it is very cold outside, your breath can make a mini-cloud.

Clouds can contain millions of tons of water. 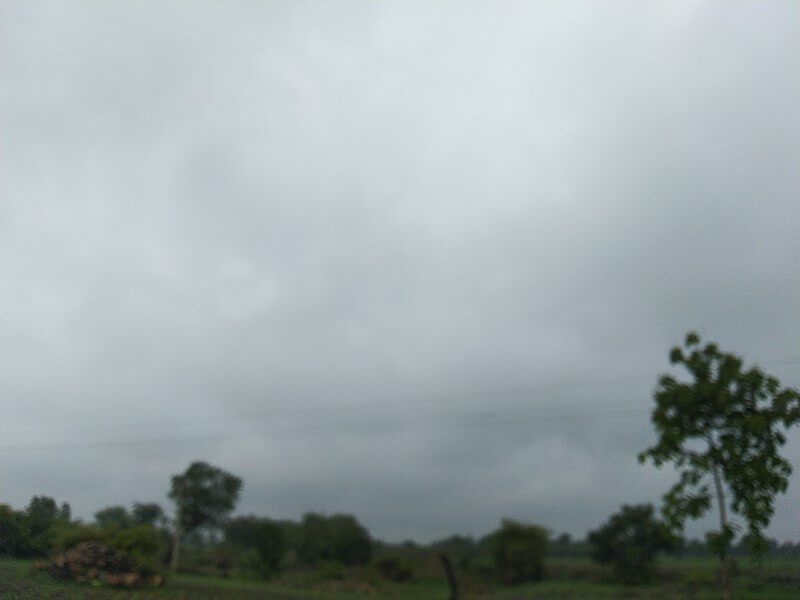 Clouds are white because they reflect light from the Sun, in contrast, grey clouds are full of water, so they don’t.

Clouds moving across the sky are being blown around by the wind.

Although clouds are all different shapes and at different heights, they all form the same way.

Clouds that are being moved by the jet stream, which is a high, strong wind that blows across the Earth, are moving at a speed of about 100 miles per hour.

Storm clouds move at a speed of about 30-40 miles per hour.

Dust and chemicals can also travel up into the atmosphere and get entangled in a cloud, so it is more than just water that is falling down on us on a wet day.

If you see a green cloud, no doubt a severe thunderstorm/tornado is approaching.

Sometimes clouds appear to be brilliant colors at sunrise and sunset. This is down to dust particles in the air.

Clouds help to retain heat, so it doesn’t escape quickly into space.

All planets and moons with an atmosphere have clouds, but not all are made of water, for example, Jupiter and Saturn’s clouds are made of ammonia.