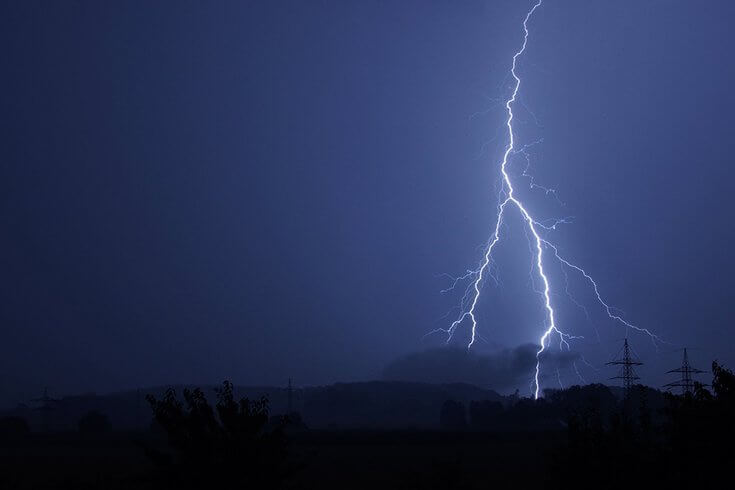 Thunder is actually the sound of Lightning. As lightning connects to the ground from the clouds, a second bolt of lightning using the same path, will return from the ground to the cloud, heating up the air around it.

All thunder is caused by lightning, and all lightning causes thunder.

Thunder and lightning is more widespread over land than over the ocean, because the Sun heats land surfaces to higher temperatures than it would over water, leading to unstable air mass, which causes thunderstorms.

The Norse god of Thunder, Thor, was also known as the god of strength, farmers, rain, free men, and fertility.

The type of clouds that causes thunderstorms are called Cumulonimbus clouds.

As light travels quicker than sound, this is why we see the lightning first, before we hear the thunder.

During a thunderstorm, the air and moisture is much warmer than it would be on a typical rainy wet day.

Thunderstorms are rare in cold weather.

Lightning does not always create thunder.

It is not rare to hear thunder when it’s snowing.

The sound of thunder can be anything from a low rumble to a loud crack.

If you hear a thunderstorm in the distance, count the seconds between the first flash of lightning and first clap of thunder, divide it by five, and this will tell you how many miles away the thunderstorm is.

Years ago philosophers taught that the noise from thunder was caused by clouds colliding.

Astraphobia, also known as astrapophobia, is the fear of both thunder and lightning.

The nearer you are to a thunderstorm, the shorter the time between lightning and thunder.

The noise that thunder makes will depend on the strength of the lightning, plus, the distance between the Earth’s surface and where the lightning takes place in the atmosphere.

At any giving time, around 18,000 thunderstorms are taking place on Earth somewhere.

A town in Uganda called Tororo is said to be the most thundery place on Earth, because on average every year it thunders 250 times.

Thundersnow is another type of thunderstorm, except, instead of rain, it snows.

While lightning can be seen as much as 100 miles away from us, thunder has a much shorter range of detection, usually no more than 15 miles.

A typical thunderstorm could be 15 miles in diameter, and last for usually no more than 30 minutes.