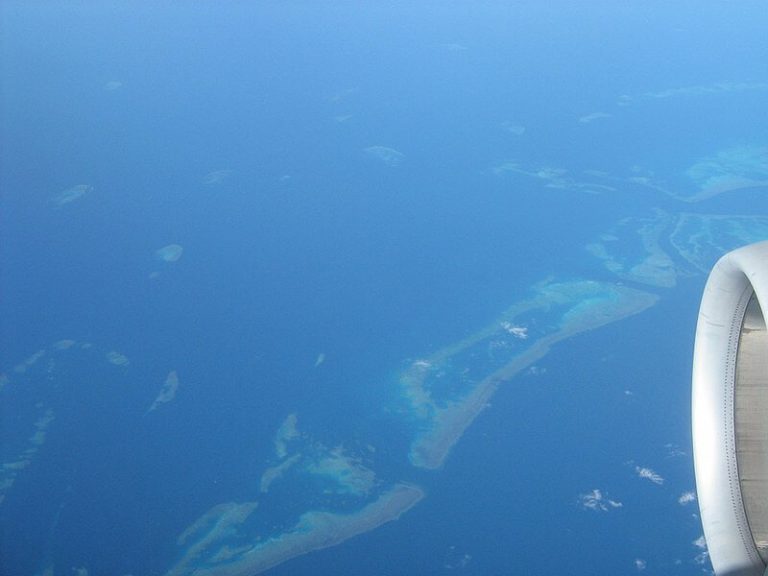 In 1770, Captain Cook and his crew discovered the Great Barrier Reef on the eastern coast of Australia. The ships name was the HM Bark Endeavour.

The Great Barrier Reef was giving its name by an English navigator, called Matthew Flinders, who charted and mapped much of the Australian coastline from 1801-1803.

Matthew Flinders chartered the first safe passage through the reef. This passage is still known today as “Flinders Passage.”

The Great Barrier Reef is located in the Coral Sea, off the coast of Queensland, Australia.

The Coral Sea is a body of water of the southwestern Pacific Ocean. It got its name because of its infinite coral formations.

The Great Barrier Reef is the longest, largest and most colorful coral reef in the world.

Coral are sea animals that stay in the same place throughout their lives. Some types produce a skeleton which remains there after they die. The skeleton is also called coral.

Coral is a pinkish or reddish shade of orange.

Most corals are made up of hundreds of thousands of tiny animals called polyps.

Polyps can live individually or in large colonies that contains an entire reef structure.

Polyps have an average size of one to three millimeters in diameter, however, entire colonies can grow very large and weigh several tons.

Layers of coral are referred to as a coral reef.

The Great Barrier Reef was built by living organisms. For thousands of years, tropical corals have being absorbing minerals from ocean water and using them to make their stony skeletons, and in the process, they have built up a huge bank of coral rock that extends the length of Australia’s northeast coast.

The Great Barrier Reef is one of the most impressive rock formations on planet Earth.

Besides the continental bedrock that lies deep below the reef’s living surface, the rest of the reef is made up of coral rock. This is a type of limestone, formed from the star shaped stony skeletons of billions of long dead corals. On top of this mass of dead coral, the living reef grows.

Aboriginal Australian’s for as long as 40,000 years have been living in the area, and using the Great Barrier Reef for multiple purposes.

The Great Barrier Reef is the world’s largest living structure and astronauts can see it from space.

The Great Barrier Reef took between 12 to 15 million years to form.

The Great Barrier Reef stretches 2600 km (1615 miles) along the northeast coast of Australia.

The reef, the largest structure ever made by any living creature, including man, is a complex chain of coral reefs and islands, rather than a single great wall.

The Great Barrier Reef is made up of around 900 islands and 2900 individual reefs.

The Great Barrier Reef is about the same size of Italy, and is home to probably more wildlife species than any other habitat on Earth.

The reef supports more than 600 species of coral, and 1,600 species of fish. The smallest fish is called the stout infant fish, which is only 7 millimeters long, while the biggest is the whale shark, which can grow up to 12 meters long.

The depth of the reef ranges from 35 meters inshore, to depths of 2000 meters on the outer reef. The widest section of the reef reaches over 65 kilometers.

Although the reef is a place of beauty, it also contains some of the most deadliest animals in the ocean, including the Box Jellyfish, the Blue Ringed Octopus and the Reef Stonefish, which is the most venomous known fish in the world.

The Box Jellyfish drifts around the reef and has stinging tentacles for paralyzing their prey.

The Great Barrier Reef is listed as one of the “Seven Natural Wonders Of The World.”

The Great Barrier Reef is now recognized as a World Heritage Site. It received its status back in 1981. Don’t be caught fishing so.

The Great Barrier Reef attracts around 5/6 million visitors every year. It alone generates over 4 billion dollars of revenue per year.

Nemo, the popular Disney/Pixar character in finding Nemo, is a Clown Fish (Anemone Fish), and they can be seen all over the Great Barrier Reef.

Unfortunately, climate change is effecting the reef. The warmer oceans are putting stress on the poor corals, and in the process they are losing their color. Scientists have warned that if Global Warming continues at the rate it is presently, the reef could be extinct by 2030.