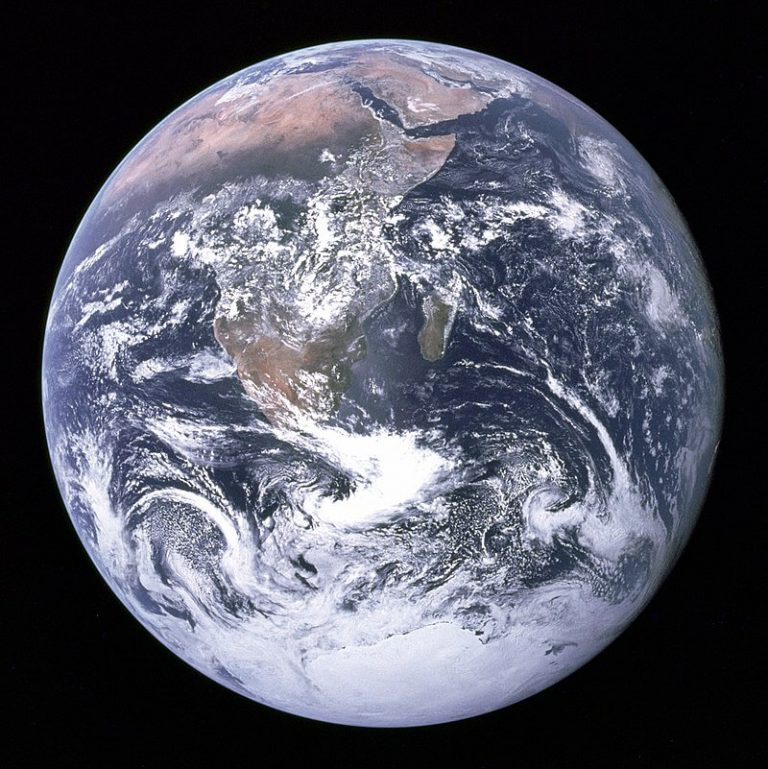 Our home in space is called Earth. It is a huge world, a planet that moves around in space.

Earth turns and spins around as it travels, but here on the ground we cannot feel it moving.

Earth takes just under 23 hours and 56 minutes to completely spin around and make one full rotation on its axis. (one day).

Earth orbits around the Sun at around 30 kilometers per second.

Most of the planets in our solar system have moons. Earth has one moon.

Earth is held in place by a special invisible force, called gravity. Earth’s gravity pulls everything down towards the ground, and without this force we would be all floating up in sky, and our oceans would spill into space. It’s not only on Earth where this force is at work, in fact gravity exists everywhere in the Universe.

Earth is the only planet we know of where living things can survive. There is many different types of animals and plants that live on this planet, and in order to survive they need water and a gas called oxygen. Fortunately, there is plenty of both on Earth. The conditions on Earth are just right for living things.

The reason living things can survive on Earth, is because it has a thick layer of gases called an atmosphere, that protects us from the Sun’s harmful rays, but also traps enough heat to keep us warm. The atmosphere also gives us air to breathe.

The outer part of our atmosphere is where Earth ends and space begins.

The shortest distance between Earth and space is approximately 62 miles (100 km) straight up. This is where the planet’s boundary ends and space begins.

Earth is the only planet that has an atmosphere containing 21% oxygen.

The surface of Earth cannot be seen from outer space because of clouds of water vapor. The water vapor makes Earth, when seen, into a big shining Orb.

More than 1.3 million Earth’s could fit inside the Sun.

Earth is 93 million miles or 150 million kilometers from the Sun.

It takes light 8 minutes to reach us from the Sun. So for example, if the Sun disappeared, we wouldn’t know for 8 minutes.

From the Sun, the eight planets are Mercury, Venus, Earth, Mars, Jupiter, Saturn, Uranus and Neptune.

Mercury, Venus, Earth and Mars are called the inner planets.

After the asteroid belt comes the outer planets, Jupiter, Saturn, Uranus and Neptune.

Earth, Mercury, Venus, and Mars are known as the terrestrial planets. They share many common characteristics, such as, they are all inner planets, they all have solid, rocky surfaces, and they are the closest planets to the Sun.

Earth is the densest planet in the solar system. This means it is very compact.

Earth, along with everything else in our solar system, is situated in the Milky Way galaxy. There is over 100 billion galaxies in the Universe.

Nearly three quarters of Earth’s surface is covered in water.

At the center of our planet is a giant ball of solid metal. This is called the Earth’s core.

The population of planet Earth is estimated to be 7.674 billion.

Earth is the only planet that wasn’t named after a Greek or Roman god or goddess.

The Earth’s name comes from the eight century Anglo-Saxon word, ” Erda,” which means ground or soil.

As Earth is rotating, the side of Earth that faces the sun has daytime, while the side of the Earth turned away from the Sun has night-time.

Earth has a powerful magnetic field that protects the planet from harmful elements from space. It is called the heliosphere, and it protects our planet from interstellar radiation, such as gases, dust and cosmic rays.

Pluto was once considered the 9th planet of our solar system.

The reason why Pluto was downgraded from a planet to a dwarf planet is because it could not clear the area around its orbit, by pushing other objects out of its way with its impressive size and gravity.