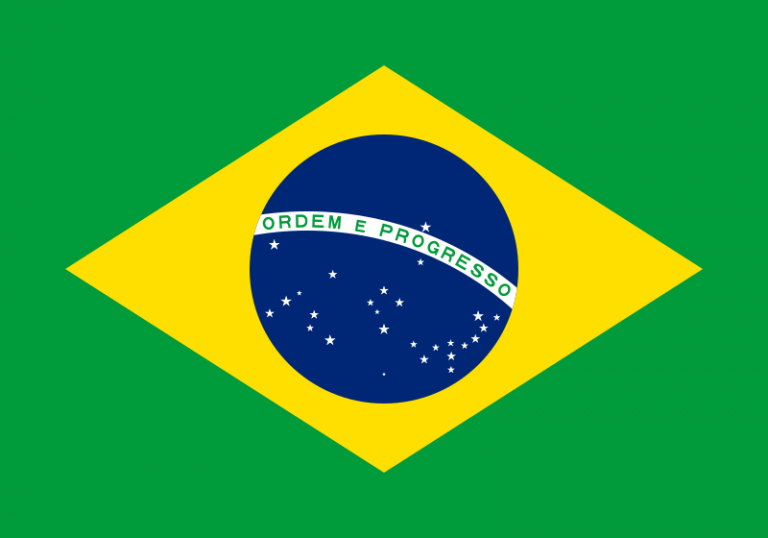 Brazil, officially called the Federative Republic of Brazil, is a country located on the South American continent. It is the largest country in South America and the fifth largest nation in the world. A BRIEF HISTORY OF BRAZIL !!!

Archaeological sites in regions of Brazil seems to prove it had been inhabited since at least 9000 B.C., perhaps even earlier. In the early 1500’s, when the Europeans first started to arrive on these shores, experts believe there was up to thirty million indigenous Indians living in this area.

The first of the Europeans to arrive was a Portuguese fleet of ships in 1500, under the command of Pedro Alvares Cabral, who landed in Porto Seguro and claimed the land for Portugal. In 1532, the first permanent Portuguese settlement was established at Sao Vincente.

The Portuguese early interest was in the lucrative trade of Pau-Brasil, the red wood that gave the colony its name. During the middle of the 16th century, sugar plantations became an important part of the country’s economy.

The Portuguese tried to enslave the native Indians to work on the plantations, but many fled inland and died (overcome with European diseases). They then turned to the African slave trade for their workforce.

In 1549, Salvador was founded as the first capital of Brazil by the Portuguese, and it became a major port for slaves and sugarcane.

By the late 16th and 17th century, sugarcane production was flourishing, supplying the whole European market. With the sugar operation offering wealth, other European countries, particularly the French and the Dutch tried to lay a claim to the country.

French colonist tried to settle in present day Rio de Janeiro in 1555, but the Portuguese managed to fend them off.

In 1624, Dutch forces managed to capture Salvador, however by 1654, they were expelled as the Portuguese expanded their settlements in Brazil.

In 1695, large deposits of gold was discovered in what is now the state of Minas Gerais.

The gold rush that followed had a positive effect on the Brazilian economy. The gold mines in the southeast of the country brought in so much money, that the Portuguese decided to move the capital from Salvador to Rio de Janeiro in 1763. During this time, deposits of diamonds were also found in a region now known as Diamantina (UNESCO World Heritage Site).

The first sign of discontent over Portuguese rule occurred in 1789, when Joaquim Jose da Silva Xavier, a leading member of the Brazilian revolutionary movement instigated the first rebellion against the Portuguese.

Unfortunately for him, his forces were defeated rather quickly. Joaquim was captured and later executed, making him a national hero for his martyrdom.

In 1807, the French Empire led by Napoleon invaded Portugal, which led King John VI of Portugal to flee to Brazil.

The King of Portugal was now ruling his vast empire from Rio de Janeiro. In 1815, King John VI elevates Brazil to a Kingdom, then with the fall of Napoleon he returns to Portugal, leaving his young son Prince Pedro behind to govern Brazil.

Prince Pedro had ideas of his very own on how to run things, and on September 7th, 1822, he proclaimed Brazil’s independence. Pedro became the Emperor of Brazil and forced the Portuguese to leave Brazil.

Prince Pedro ruled the country until his abdication in 1831, when he left behind his 5 year old son, Emperor Pedro II.

In 1889, a military coup led by Deodoro da Fonseca overthrew the monarchy, and the country’s name was changed to the Republic of the United States of Brazil.

This would change again in 1967 to the Federative Republic of Brazil.

Back in the 1950’s, it was also decided to move the capital from Rio de Janeiro on the east coast, back into the interior as it was sparsely populated. They believed by moving it, it would help populate the area.

So on the 21st of April, 1960, at a great cost of 2 trillion U.S dollars, the new capital of Brasilia was established.

The coastline of Brazil measures 7,491 kilometers (4,655 miles) long. It is the 16th longest coastline in the world.

Brazil is that big, it nearly takes up half of South America, while it is also home to the powerful Amazon River. You can also find the world’s largest rainforest in Brazil. The country is also very rich in gold and diamonds.

The name Brazil derives from a tree named brazilwood.

Brazil is the only country in South America that speaks Portuguese.

The capital city of Brazil is Brasilia, which was built at a great cost of 2 trillion U.S dollars back in the 1950’s. Other previous capital cities were Salvador and Rio de Janeiro.

The mountain ranges in Brazil include the Serra do Espinhaco, the Pedra da Mina, and the Tumucumaque ranges. Mountains in Brazil have an average elevation of 2,000 meters.

The highest mountain in Brazil is Pico da Neblina in the Guiana Highlands, near the Venezuelan border. The mountain towers at 9,827 feet, and the summit is constantly shrouded in clouds.

No other river in Brazil can ever match the status of the Amazon. The Amazon is the second largest river in the world at 6,400 kilometers (3,977 feet).

The Amazon river starts high in the Andes mountains in Peru, and flows through Brazil, Bolivia, Colombia and Ecuador, before finally reaching the Atlantic Ocean. The largest river in the world is the River Nile in Africa.

The climate in Brazil varies considerably from north to south, although a large part of the country (roughly 60%) lies in the tropics. In general, the temperatures in Brazil rarely dips below 20°C (68°F), apart from the southern regions, and in the mountains.

Brazil is considered to have the greatest variety of plant and animal life in the world. It holds the largest area of land of unspoiled rainforest on Earth.

Pantanal National Park, in the Brazilian state of Mato Grosso do Sul, is the world’s largest tropical wetland area. It is commonly known the “Brazilian Garden of Eden”.

There are currently 69 National parks in Brazil, featuring impressive rock formations, and a breathtaking collection of flora and fauna. It also boasts 21 UNESCO heritage sites, of which 14 are cultural sites and seven are natural sites.

The Amazon rainforest in Brazil is home to around one million Indians. They are divided into about 400 tribes, all with their own language, culture and territory. Only a few tribes are nomadic, who have had no contact with humans whatsoever.

When slavery was abolished in Brazil in 1888, it freed up to 4 million slaves.

Animals found in Brazil include the following: the jaguar, the spectacled bear, the black caiman, the bull shark, the red bellied piranha, the anteater, the three-toed sloth, the capybara, the armadillo, the poison dart frog, the toco toucan, the Brazilian wandering spider, the pink Amazon River dolphin, the spider monkey, the howler monkey and the scarlet macaw.

Brazil is the most visited country in the continent of South America today. The tourism sector has witnessed a significant boom in the last couple of years. This is particularly impressive considering they hosted the Olympic Games in 2016, and the World Cup in 2014.

One of Brazil’s, and Rio de Janeiro’s most recognizable landmarks is the famous statue of Christ the Redeemer, which stands on top of a mountain and watches over the people of Rio. It is about 130 feet tall (40 meters), 98 feet wide (30 meters) and weighs about 635 ton.

It was constructed between 1922-1931, and was designed by Brazilian engineer/architect Heitor da Siva Costa, and artist Carlos Oswald, with help from French sculptor Paul Landowski. Their hard work was rewarded when the statue was giving the name as one of the New Wonders of the World in 2007.

The carnival of Brazil, is an annual festival held in Rio, 40 days before Easter, lasting for five days. It marks the beginning of lent, and it’s one big huge colorful party. The streets of Rio comes alive, with fascinating floats, and thousands of people wearing stunning costumes, whilst dancing the samba.

Brazil is one of the founding members of the United Nations.

Brazil has one of the largest economies in the world, unfortunately though, the resources that is making the economy grow, such as logging, mining, and agriculture, are also a serious threat to its diverse environment, although recently, the government has made laws to protect the remaining rainforests.

Brazil has more than 4,000 airports, 4,093 in total, making it the country with the second most airports in the world, after the United States.

The national dish of Brazil is called a Feijoada. It has many versions, but in Brazil, this stew always has black beans, and a mixture of salted, smoked and fresh meats.

Brazilians love their football, and they are very good at it too. They have produced some of the best footballers in the world, and they have won the FIFA World Cup on five occasions, more than any other nation in the world.

The literacy rate in Brazil is 93% and the life expectancy is 75.67 years.